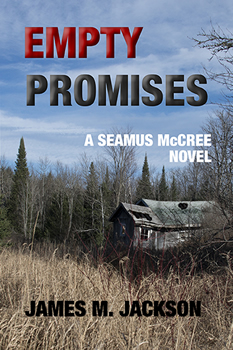 His client is to testify in a Chicago money laundering trial. He’s paranoid that with a price on his head, if the police know where he’s staying, the information will leak. Seamus promised his business partner and lover, Abigail Hancock, that he’d keep the witness safe at the McCree family camp located deep in the Upper Peninsula of Michigan’s woods.

Abigail is furious at his incompetence and their relationship flounders. Even his often-helpful son, Paddy, must put family safety ahead of helping his father. Seamus risks his own safety and freedom to turn amateur sleuth in hopes he can solve the crimes, fulfill his promise of protection, and win back Abigail. Wit and grit are on his side, but the clock is ticking . . . and the hitman is on his way.

I seek to entertain readers with a universe parallel to ours, one using real places but imagined people and events. Those who want escape will wonder where the time went as they read just one more scene before going to bed. Those who look for the deeper meanings fiction can provide will find them.

I was surprised how much introducing a grandchild into Seamus McCree’s life affected the way he thinks and acts.

I started to write a book that would explore some of the controversial issues over open pit mining in the Upper Peninsula of Michigan within the context of a domestic thriller. Although mining does play a role in the story, what it turns out I really wanted to explore were family relationships under stress.

Having Sara Paretsky tell me in a workshop that she really enjoyed my voice sustained me through the years before I earned my first publishing contract. Robert B. Parker’s early works remind me of how to write using a spare style. John Sandford for allowing Lucas Davenport to mature and grow as he aged and took on a family.

James M. Jackson authors the Seamus McCree series consisting of five novels and one novella. Jim splits his time between the deep woods of Michigan’s Upper Peninsula and Georgia’s Lowcountry. He claims the moves between locations are weather-related, but others suggest they may have more to do with not overstaying his welcome.

He is a member of International Thriller Writers and the past president of the 700+ member Guppy Chapter of Sisters in Crime. You can find information about Jim and his books on his website.