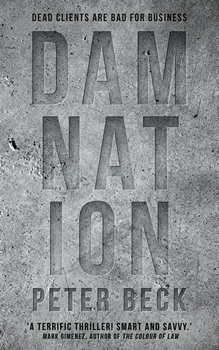 Dead clients are bad for business, something that Tom Winter, head of security at a private Swiss bank, knows only too well. When a helicopter explosion kills a valuable client and a close colleague, Winter teams up with the mysterious Egyptian businesswoman Fatima Hakim to expose the truth behind their deaths.

Together they follow the money trail around the world and back into the Swiss mountains, the NSA watching their every move. As they start closing in on the truth, Winter and Fatima turn from being the hunters to the hunted, finding themselves in a deadly, high-stakes race against the clock.

Bloody fingernails! I’m Swiss and since it’s often said that the Swiss are a bit boring, I hope the readers will be surprised how fast-paced DAMNATION is. I’ve worked hard to create a different hero and heart-stopping cliffhangers with scenes around the world and in our spectacular Swiss mountains. Hence the bloody fingernails.

There are not many Swiss thrillers out there…

The hero, Tom Winter, is head of security at a Swiss private bank. This role is unique in the world of thriller writing. Winter has a lot of freedom and room to maneuver. So, as an author, I can send him all over the world. That’s fun to write.

The name “Winter” was picked deliberately, by the way. It goes with the snow and ice in the Swiss mountains and works well in both German and English.

I wrote the German original ten years ago, around the time when the financial crisis was happening. I already knew that there were great villains in the banking world. But the deeper I dug, the more I discovered how ruthlessly they do business behind the picture-perfect scenes. Since a good hero ultimately needs a really bad opponent, that helped me to shape the Tom Winter series.

There’s another thing that surprised me. DAMNATION was translated by Jamie Bulloch, a highly regarded translator. He transformed my German sentences into a really elegant read. Initially, I was worried that my characters wouldn’t be true after the translation. But now, for me, DAMNATION reads even better in English. Maybe my baby has kind of grown up and developed its own personality.

That Tom Winter is not a superhero but a regular guy with a past. Like the rest of us, he has his faults and makes mistakes. He has a cat, doesn’t say much, cracks dry jokes and longs for intimacy and peace.

For me it’s really important that Winter has strong values and tries to do the right thing, despite the bank’s boss, who’s only interested in making the biggest profit possible. Along the way, Winter grows with his dilemmas when he’s caught between a rock and a hard place. We all face these quandaries at one time or another, albeit usually on a smaller scale.

If I had to choose only one, it would have to be John le Carré. He lived in my hometown Bern for some time, and he even set some of his scenes here. I admire him for very cleverly connecting the world’s turmoil with Smiley’s destiny.

But you’d find all the usual suspects on my bookshelves, from John Grisham to Stig Larsson. I love Tana French from Ireland, the Norwegian Jo Nesbø with his Harry Hole and of course Lee Child. Not unlike his Jack Reacher, Tom Winter roams freely, but always finds himself in situations where he has to intervene.

And last but definitely not least, I’ve read all the Mark Gimenez thrillers, who dubbed DAMNATION ‘A terrific thriller! Smart and savvy.’

Peter Beck studied Psychology, Philosophy and Economics in Bern, where he also gained a doctorate in Psychology. He did his military service as a cyclist in the Swiss Army and has a black belt in judo.

Having done an MBA in Manchester, UK, he went on to become an executive board member of a large Swiss company and sat on several non-executive boards.

Today he is his own boss and divides his time between writing the Tom Winter thrillers and supporting businesses in shaping their culture, organization and strategy. He is fluent in English.

His thriller DAMNATION (2018) was originally published in German (Emons Verlag, 2013), has now been translated by Jamie Bulloch and is brought to you by Point Blank, an imprint of Oneworld, twice winner of the Man Booker Prize.