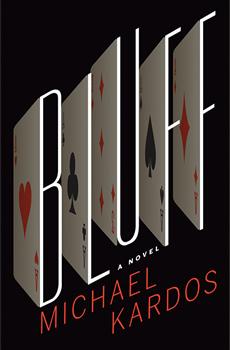 At twenty-seven, magician Natalie Webb is already a has-been. A card-trick prodigy, she took first place at the World of Magic competition at eighteen and has never again reached such heights. Shunned by the magic world after a disastrous liaison with an older magician, she now lives alone in a New Jersey apartment with her pigeons and a pile of overdue bills. In a desperate ploy for extra cash, she follows up on an old offer to write for a glossy magazine and pitches the editor a seductive topic: the art of cheating at cards.

But when Natalie meets the perfect subject for her piece―a poker cheat who dazzles at sleight of hand―what begins as a journalistic gamble soon becomes a test of everything she thinks she knows about her talent, and herself. Natalie soon finds herself facing a dangerous proposition that could radically alter her fortune―to help pull off a $1.5 million magic trick that, if done successfully, no one will ever suspect happened. With Kardos raising the stakes chapter after chapter, BLUFF is a breathtaking work of suspense from a writer at the top of his game.

The Big Thrill caught up with award-winning author Michael Kardos to discuss his latest thriller, BLUFF:

BLUFF takes a deep dive into the professions of magic and poker. I was interested in writing from the perspective of an extremely talented female magician who must navigate both of those traditionally male-dominated worlds.

As a kid, I was really into magic for a while. Working on BLUFF all these years later, I kept thinking about the correlations between writing suspense and performing magic: the set-up, the misdirection, the striving to give your audience (or reader) a thrill and a feeling of wonder. Being conscious of these parallels helped me to ensure that the novel’s form reinforced its content.

There’s an important poker hand in the middle of the novel (illustrations drawn by yours truly!). I worked and reworked that hand, talking to many poker players at all levels of experience, for nearly a year before I felt satisfied with it.

Michael Kardos is the author of the novels Before He Finds Her (2015) and The Three-Day Affair, an Esquire best book of 2012, as well as the story collection One Last Good Time, which won the Mississippi Institute of Arts & Letters Award for fiction, and the textbook The Art and Craft of Fiction: A Writer’s Guide. His short stories have appeared in The Southern Review, Crazyhorse, Harvard Review, and many other magazines and anthologies, have won a 2015 Pushcart Prize, and were cited several times as notable stories in Best American Short Stories. Michael grew up on the Jersey Shore, received a degree in music from Princeton University, and played the drums professionally for a number of years. He has an M.F.A. in fiction from The Ohio State University and a Ph.D. from the University of Missouri. He lives in Starkville, Mississippi, where he is an associate professor of English and co-director of the creative writing program at Mississippi State University.