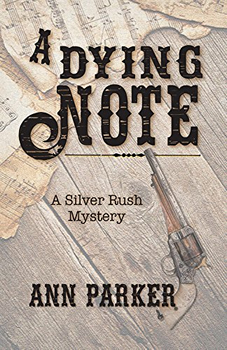 It’s autumn of 1881, and Inez Stannert, still the co-owner of Leadville, Colorado’s Silver Queen saloon, is settled in San Francisco with her young ward, Antonia Gizzi. Inez has turned her business talents to managing a music store, hoping to eventually become an equal partner in the enterprise with the store’s owner, a celebrated local violinist.

Inez’s carefully constructed life for herself and Antonia threatens to tumble about her ears when the badly beaten body of a young musician washes up on the filthy banks of San Francisco’s Mission Creek canal. Inez and Antonia become entangled in the mystery of his death when the musician turns out to have ties to Leadville, ties that threaten to expose Inez’s notorious past. And they aren’t the only ones searching for answers. Wolter Roeland de Bruijn, “finder of the lost,” has also been tasked with ferreting out the perpetrators and dispensing justice in its most final form. Leadville’s leading madam Frisco Flo, an unwilling visitor to the city with a Leadville millionaire, is on the hook as well, having injudiciously financed the young musician’s journey to San Francisco in the first place.

Time grows short as Inez and the others uncover long-hidden secrets and unsettled scores. With lives and reputations on the line, the tempo rises until the investigation’s final, dying note.

My hope is that, first of all, readers will find A DYING NOTE a ripping good read, entertaining, and a welcome escape into times past. After all, isn’t that what fiction is all about (well, maybe not *all* about, but at least in part)? Beyond that, I hope folks gain a picture of what life was like in San Francisco after the Gold Rush and before the 1906 Earthquake. Not everyone was rolling in money or in the gutters (there was a large middle class). But money, then as now, was a huge motivator for deeds of desperation.

Well, here’s something you won’t find out and about: Originally, I didn’t intend to set this, the sixth book in the series, in San Francisco. However, I was persuaded by my editor that it was the right thing to do with my character. And, as always, she was right!

I love Martin Cruz Smith’s books… all of them! He can bring a time and place to life with people who live and breathe. Two of my favorites of his: Rose and Dogs Eat Wolves.
Dianne Day’s Fremont Jones historical mystery series, back in the 1990s, also was a big influence on me–Fremont Jones was a woman alone, determined to make her way in the West (and solve mysteries while doing so)… right up my alley! Most of her series took place in early 1900 San Francisco, so I consider it an interesting turn of serendipity that, after five books, here we are, walking the streets that Fremont Jones walked (albeit doing so a couple decades earlier!). 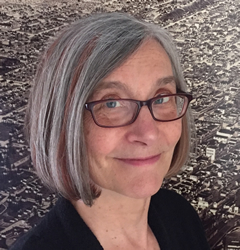 A science writer by day and a crime fiction writer by night, Ann Parker pens the award-winning Silver Rush historical mystery series, set in the 1880s American West. The series features Leadville, Colorado, saloon-owner Inez Stannert—a woman with a mysterious past, a complicated present, and an uncertain future. Ann’s ancestors include a great-grandfather who was a blacksmith in Leadville, a grandmother who worked at the bindery of Leadville’s Herald Democrat newspaper, and a grandfather who was a Colorado School of Mines professor, and another grandfather who worked as a gandy dancer on the Colorado railroads. The series has won numerous awards, including the Colorado Book Award, the Colorado Gold Award, the Willa Literary Award, and the Bruce Alexander Historical Mystery Award. A DYING NOTE, the sixth in the series, brings Inez to 1881 San Francisco, California. Scheduled for release April 2018.