Paul Storey likes the idea of being a private detective, especially when his first case is to find two missing guitars belonging to a pop group who were big fifteen years ago. How hard could it be?

But he quickly learns the case isn’t really about a petty theft. Pretty soon there’s a murder, and a connection to large-scale drug smuggling, and to a pair of Albanian crooks who are looking to expand their operations and don’t care how they do it. In addition he finds himself drawn to the mysterious singer Geneva Chance, who has secrets of her own.

What seemed straight-forward becomes both complicated and dangerous.

THE SONG OF GENEVA CHANCE author, Keith Dixon, sat down with The Big Thrill to discuss his latest thriller:

I think the book gets back to the traditional values of a complex story with interesting characters, rather like the books of Ross Macdonald and Elmore Leonard. The books in this series show ordinary people taking action that doesn’t do them any good, but seems to them the only way out of their predicament. The bad guys are not evil as such, just short of options.

As often happens, I found one of the minor characters developing in a way I hadn’t expected – he became more sympathetic and understandable even though he ended up doing something surprisingly violent. It taught me to trust my instincts and listen to the characters as they talked.

The major influence on this particular series is Elmore Leonard. I loved the way the characters drove his plots and how the good guys and bad guys could have conversations with each other, seeing each others’ point of view. I tried to incorporate some scenes of that nature in this book and I think it deepened our understanding of both sets of characters. 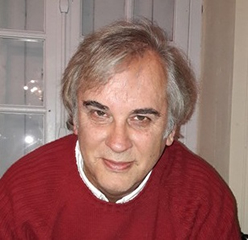 Keith Dixon was born in Yorkshire and grew up in the Midlands. He’s been writing since he was thirteen years old in a number of different genres: thriller, espionage, science fiction, literary. He’s the author of seven novels in the Sam Dyke Investigations series, three in the Paul Storey Thrillers series and two other non-crime works, as well as two collections of blog posts on the craft of writing. When he’s not writing he enjoys reading, learning the guitar, watching movies and binge-inhaling great TV series. He’s currently spending more time in France than is probably good for him.