On the surface, it looks like Paul Callahan has it all. The family, the house, the job. But nothing is ever as perfect as it seems, and when a college friend contacts Paul out of the blue, he finds himself reliving his first year of college, when everything went so right, and then so very wrong. The novel skips between the present and the past, tracing what happened to Paul and his friends during college and the effects in the present day.

TESTAMENT is a story of friendship and love and of the terrible evil people are capable of doing to one another. It is the story of a man doing his best to move forward, but struggling with an emotional anchor latched firmly in the past. But more than anything, it is a story about redemption and the unfathomable workings of the human heart.

First off, I hope people will be entertained. I also hope readers will see the book as an examination of why people do the terrible things they do. There’s a lot of interplay here between parents and their children, and I certainly intended to think about how parents can screw up their kids. At the end of the day, I just wanted to tell a good story that felt real, but more urgent.

Part of the reason I wrote the book was to think back on my time in college. In particular, I wanted to think about my years with my roommate, who was also my best friend. He was also my diametric opposite, and I have no idea what made us work.

My main influences have been horror writers, such as Stephen King, Clive Barker, and Dean Koontz. With this book, I was thinking a lot more about Donna Tartt’s The Secret History, however. I’ve never written a non-horror novel, so this was a first for me. 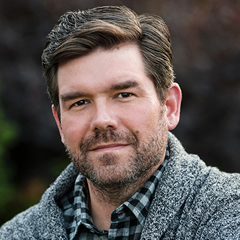 Mark P. Dunn is originally from Swarthmore, Pennsylvania but has lived most of his adult life in Ohio, Maine, and North Carolina, where he teaches high school English at a small private school. Mark is married to the photographer Piper Warlick, and the two care for their daughters and for a veritable menagerie of animals, ranging from dogs to cats to chickens. Mark’s first novel, A Girl in Mind, was published by Five Star Mysteries in 2006. His second, The Last Night, was released in 2016 by JournalStone Publishing. He has also published horror and suspense tales in various magazines and anthologies. Currently, he is at work on his fourth novel, a supernatural thriller set in the wintery woods of western Maine.

To learn more about Mark, please join him on Facebook.