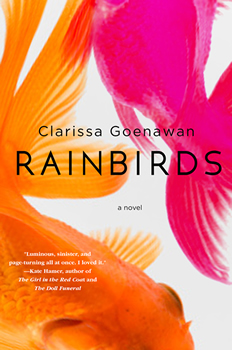 Five years is a long time, even longer if you think of it in dog years. For Clarissa Goenawan, that’s how long it took from the conception of her exquisite debut, RAINBIRDS, to publication. And some of that time was actually spent writing it.

If you’re looking for a straight suspense thriller, with murder, mayhem, car chases, stuff blowing up and the world as we know it at stake, RAINBIRDS is probably not for you. But if you’re in the market for an intelligent, well-written, thought-provoking novel, what Goenawan calls “a literary mystery with an element of magical realism set in Japan, a coming-of-age story masquerading as a murder mystery,” then RAINBIRDS is right up your alley.

RAINBIRDS doesn’t read like a first novel. You know the kind: precious and derivative. Instead, it appears to have sprung forth from a talented writer who’s been around longer than 29 years—“I’m turning 30 this year (gasp), but until my birthday in April, I’m going to insist I’m in my twenties”—and who’s carefully developed a plot and characters that grab you from the get-go and don’t let go.

The story is set in motion with the murder of a young woman, Keiko, the older sister of Ren, who visits the fictional small town of Akakawa (inspired by one of the suburban cities in Indonesia Goenawan visited as a child), where his sister moved years earlier to teach. While mourning her death, Ren hopes to find out who murdered her and why, but instead finds what he really wants is to get closer to his late sibling.

The novel is set in the mid ‘90s, for a reason. “I prefer the simpler life before almost everyone had cell phones,” says Goenawan. “People simply turned up on time for their appointments. They had proper conversations during lunches; they actually looked at and talked to one another. I guess I miss those days.”

Clarissa Goenawan was born and raised in Surabaya, the second largest city in Indonesia. She migrated to Singapore, where she is currently based, when she was sixteen. Although RAINBIRDS, winner of the 2015 Bath Novel Award, is her first, her short stories have won several awards and have been published in various literary magazines and anthologies.

Though trained in visual communications and marketing, she’s wanted to be a writer since she was a child. “Becoming a writer is my childhood dream,” she says. Toward that end, she studied novel writing with Curtis Brown Creative, a London-based writing school run by the literary agency.

Prior to writing full-time, Goenawan worked a couple years in marketing, sales and banking. “I even did marketing for a book distribution company. The best perks of that job were getting my hands on the ARCs and the staff discount. I used to buy boxes of books, using up my entire quota and then asking my colleagues to let me use theirs.”

She’s been inspired by many writers, but narrows it down to her top five. “I admire J.M. Coetzee for his clean and lean prose. Deborah Levy for her brilliant writing. Haruki Murakami for his whimsical stories. Banana Yoshimoto for her atmospheric narrative. And Stephen King for his discipline and dedication to the writing life. I recommend his On Writing to all aspiring writers.”

“RAINBIRDS was my NaNoWriMo novel,” she says. “I spent a year and a half writing the first draft, and half a year editing it. Querying and finding a publisher took more than a year, and then the publishing process was around two years.”

The idea for the novel came to her as it comes to so many writers: with a question. “I asked myself, what if someone I cared about passed away unexpectedly, and I realize too late I never got to know that person? At first, the plan was to write a story about a young man who lost an older brother who lived apart from him and hid some sort of terrible secret. Later on, the quiet brother morphed into an elegant sister. I got more and more ideas and told myself, ‘Hey, this is not a short story. This has to be a novel.’”

Goenawan has chosen to tell the story from a male point-of-view and, at least as far as this male is concerned, she nails it.

When asked why she made this choice, she says, “That’s a very interesting question, but I don’t have an exact answer for it. The choice to use a male POV wasn’t a conscious decision, but rather, what I felt was right for the kind of story I want to tell. Ever since the idea came to me, the main character has always been a young man. I did make some minor adjustments on the text after a few male readers from my writing group commented that men, in general, are more decisive and less perceptive compared to women. I have to emphasize the words ‘in general’, because there’s always a danger of stereotyping. All individuals are unique. There are plenty of sensitive men and strong-minded women around. Interestingly, I have a number of friends telling me, ‘Clarissa, do you know that you think like a guy?’”

She did not set the novel in her native Indonesia. “I wanted to set the story in an Asian country with a variety of backdrops—mountains, lakes, etc.—with four seasons. I’d studied the Japanese language in high school and was part of a Japanese cultural club, so Japan was an obvious choice.”

Once she chose what to write about and where it was to be set, she did “a lot of Google searches and library visits. One of the highlights was when I once pulled out the historical record of the weather and moon phase in 1994 Japan. That being said, it’s also important to know where to stop. Most of my research materials never made it into the novel.”

Goenawan is working on her second and third novels. “Both are literary mysteries,” she says, “and just like RAINBIRDS, they’re set in Japan.”

“All my novels are interrelated,” she says. “They’re standalones—they have different stories and different main characters—but they’re set in the same universe. You’ll find characters in RAINBIRDS making appearances in the next novels. For those who’ve read RAINBIRDS, I hope you’ll have fun guessing which characters will become the main characters in the other novels.”

Clarissa Goenawan is an Indonesian-born Singaporean writer. Her debut novel, RAINBIRDS, is the winner of the 2015 Bath Novel Award. Her short stories have won several awards and been published in various literary magazines and anthologies. She loves rainy days, pretty books, and hot green tea.

To learn more about Clarissa, please visit her website.