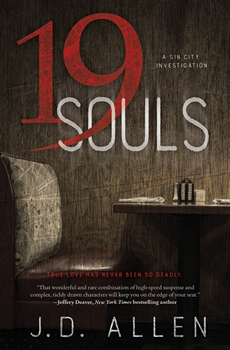 Jim Bean is having a bad day. A bad year, a bad life. Sophie Evers, his latest client, has duped him in the worst possible way. Instead of a straightforward missing persons case, he’s led a serial killer straight to her most coveted prey.

Sophie’s clung to the demented belief that she and Daniel Hodge belonged together. Instead of sleeping her way to the top, she killed her way into a position to create the “perfect life” for the only man she ever loved. Except now she can’t find him. Her plan: kill Daniel’s sister and manipulate a private investigator into flushing out her man.

Despite being told to leave the case alone, responsibility drives Jim to set things straight before Sophie’s delusion shatters and more souls are lost.

19 SOULS is a modern noir take on the sleazy casino lizard PI. Although Jim Bean lives in Vegas, he’s not a typical Las Vegas Strip investigator who spends his time gambling and drinking until a mysterious woman comes offering work. Not that he doesn’t have his issues, he does. Bean uses technology and modern investigation techniques to track down people and evidence. With the Sin City Investors series, Jim confronts the decay, both physical and spiritual, at the heart of commercial Vegas.

Research for my fatal femme antagonist, Sophie Evers, broadened my understanding of female serial killers. There’s a perception that the fairer sex does not commit serial murder. The truth is, history’s full of ladies who kill. And kill well. Many law enforcement officials think that there are plenty of women out there taking victims. Catching them is complicated because their motives are far different from male serial killers, making the connection between the victims challenging to trace.

I needed a villain who would be a challenge to my PI, Jim Bean. And not just your typical Vegas wiseguy. So I spent a great deal of time looking for inspiration for the lady who takes my PI on the ride. Best way to do this was to put the reader in the head of the female serial killer. Sophie’s desires and psychosis are a considerable part of the story. I’ve been asked more than once where I came up with such a creepy dame.

Nope. I’m not a black widow myself; I built the character from bits and pieces of killers I’ve studied over the years. Sophie is OCD, driven, smart, a psychopath, and narcissistic, and you’d never know it if she didn’t want you to. 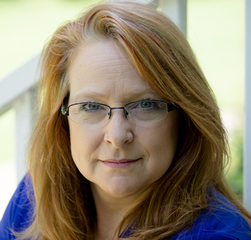 J. D. Allen was a Mystery Writers of America Freddie Award-winner. In 2018, her Sin City Investigations  series launches from Midnight Ink. She has a short story in the Anthony Award Winning anthology, Murder Under the Oaks. She is a member of the Bouchercon National Board, MWA, PI Writer’s of America, and her local Sisters in Crime chapter. She’s an Ohio State Univ. Alum with a degree in forensic anthropology and a creative writing minor.

To learn more about J. D., please visit her website.