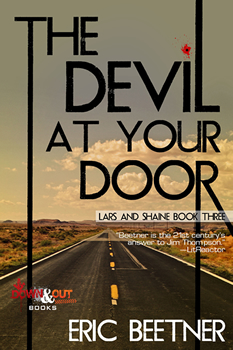 Eric Beetner´s new novel, THE DEVIL AT YOUR DOOR, is the final installment of a trilogy where protagonists Lars and Shaine have returned to a quiet life on the islands.

This story revolves around Lars, a man trying to live down the mistakes of his past and set them right in the only way he knows how. It’s also a book about family—the one we create, regardless of biology.

When Lars lands in a hospital, Shaine is called in from a thousand miles away, and she must take the lead in the last job of Lars’s storied career of “death for hire.” Over the course of three books, Lars and Shaine’s relationship has inverted—and here, Shaine must step in to run the show while Lars takes a back seat. It’s a test of how well he has prepared her, and whether she’s had time to learn the most important lesson of all—the cost of killing.

As the end of the trilogy looms ahead, Beetner admits he found it hard to say goodbye to his characters. “Lars is, in many ways, the type of character I write best,” he says. “A man on the wrong side of the law, and yet someone you root for. He has a good heart beneath his abhorrent deeds.”

Beetner is perhaps more invested in the characters due to the nature of writing a series.

“These two have been more personal for me than any other I’ve written,” he adds.

In the purest form of life imitating art, save for the killing, this trilogy walked a path to publication filled with challenges and tribulations, way above the average. The first book sold in 2012 to a new e-book only imprint of Dutton called Guilt Edged Mysteries. Thrilled and excited, Beetner wrote Book Two, only to be told the imprint was in flux. Later, it shut down for good.

Then, the indie press 280 Steps picked up the book, with an agreement to release the second, and a contract to write the third.

“Things were going along fine, and then 280 Steps shut down, giving the authors a few days’ notice,” Beetner says. “This happened two weeks before THE DEVIL AT YOUR DOOR was set to be released. We had a cover, edits were done, the whole nine yards.”

Orphaned again, Beetner turned to Down & Out Books, who he’d been working with on other projects.

“Now the trilogy is complete after three publishers and six years. But if you know anything about Lars—he’s tough to kill,” he says. “I like to think the third book finally coming out is a testament and a good example of never giving up.”

Many of Beetner’s dedicated and faithful readers never gave up either. And as reward, one received an interesting compliment.

“The character of Michelle is named for one the earliest readers and a dedicated fan,” Beetner says. “She bears no resemblance whatsoever to the real person, though. This Michelle isn’t always so nice the way the real life Michelle is.”

In a surprising turn of events early in the book, Lars is diagnosed with Parkinson’s Disease. Beetner’s father was diagnosed 20 years ago and so he witnessed firsthand the effects. He decided to honor his father in some way, and he figured it’d be interesting to see how Lars, a tough old dog, dealt with such a malady.

“Not that it makes or breaks the story, but I wanted to show a character dealing with this largely unspoken disease that I knew so well,” Beetner says. “My father gave me insight into the early signs, some of which show up in Book Two but you’d have to go back and re-read to notice them, I think. He’s been a very active advocate for PD, serving on the Ohio Governors council, lobbying congress, and serving as president of his local Parkinson’s group a few years ago when he was still able to get around better.”

The character of Nikki returns with a vengeance for the grand finale. Lars felt he’d dealt with all his unfinished business at the end of the previous book.

“But then he realizes Shaine has unfinished business of her own, and he takes it upon himself to fix her problem for her,” Beetner says. “It turns out he needs her maybe more than he thought.”

In addition to novels, Beetner writes short stories. He uses them to get the creative juices flowing. Since he feels the industry moves with at a slow pace, he wasn´t inclined to delve into another novel. By doing shorts, he felt invigorated and the ideas are moving again.

He firmly believes that work begets other work, ideas lead to more ideas.

“I find the best way to get over a lack of motivation to do the work is to force yourself like a professor to just do the damn thing, and then once you’re into it I remember what I like about it and everything is fine again,” he says. “So, there you have it, writers—stick with it. If you believe in something, don’t let it languish. There’s always a way!” 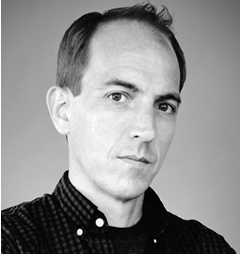 Eric Beetner has been described as “the James Brown of crime fiction – the hardest working man in noir” (Crime Fiction Lover) and “The 21st Century’s answer to Jim Thompson” (LitReactor).

He has written more than 20 novels, including Rumrunners, Leadfoot, The Devil Doesn’t Want Me, The Year I Died 7 Times and Criminal Economics.

He co-hosts the podcast Writer Types and the Noir at the Bar reading series in Los Angeles, where he lives and works as a television editor.