Creating a Character That Strikes a Chord 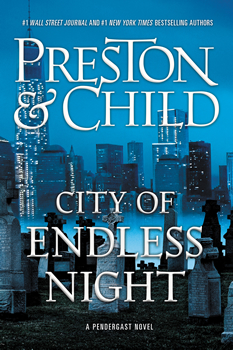 The New York Times bestselling authors Douglas Preston and Lincoln Child are back with a new Agent Pendergast thriller, and this one has a sensational ripped-from-the-wildest-tabloid headlines premise: A serial killer in New York City who cuts the heads off his victims.

The bizarre decapitations in CITY OF ENDLESS NIGHT-—plus the presence of an aggressive New York Post reporter out to get a big scoop who Pendergast has to outsmart as well as the killer—brings to mind the famous real-life Post headline: “Headless Body in Topless Bar.”

As it turns out, I was one of the editors at the New York Post then who helped produce that memorable headline, so naturally my first question for Preston and Child was how much it served as an inspiration for this book. The authors said they originally came up with the beheading idea for a different reason, but “absolutely that headline was very much in both of our minds.”

“I lived in New York when that issue of the Post came out,” Preston recalls. “I was living with a girl with a keen sense of humor and she came home with 10 papers. She said: ‘Look at this headline. It’s the most amazing headline. It’s the headline of the century, they’ll never be a headline better than this.’ ”

“The Post is a large factor in the book because it’s a New York icon,” adds Child. “Its grittiness, its connection with the heartbeat of New York and its very New York attitude and eagerness to stay with the biggest stories that involved New Yorkers has always given me affection for it. That’s why it seemed like an ideal paper to feature in the story.”

Unlike the Post’s real “headless” murder—which involved the killing of a bar owner during a robbery, CITY OF ENDLESS NIGHT, the 19th in the hugely popular Pendergast series, has a much more complex motivation with twists that keep you guessing until the very end. All of the victims in the book are rich, powerful, and extremely well protected by security, which makes the killer who’s doing the beheading a brilliant and cunning villain.

But, of course, the book is really about beloved FBI Special Agent A.X.L. Pendergast —a unique investigator who has become one of the most popular fictional characters ever to grace thriller fans.

Even Preston and Child aren’t exactly sure why Pendergast appeals so much to their readers.

“I think he’s a breath of fresh air,” Child says. “He’s very different from most detectives and heroes of thrillers. And I think that’s because we weren’t afraid to make him eccentric. He was erudite, he was highly eccentric, he had a strange family history, he was wealthy—he just seemed to strike a chord with readers.”

Preston remembers how the Pendergast character was first created. He had originally begun writing their first book Relic with two traditional cops, but Child suggested they needed a more unusual detective. “I was really offended and bristled, ‘Oh, yeah, we need some albino from New Orleans.’ He replied: ‘You know, we can work with that. Let’s make him very pale. He looks like a corpse, dresses like an undertaker…’

“In 15 minutes this man was standing in front of us, fully formed. We knew who he was without knowing anything about his back story. A man out of place and out of time. A man from the Old South in New York City. He cuts a bizarre and offensive figure to many NYPD cops. He’s wealthy, he’s arrogant. That was the intention. It turns out he’s a very complex human being, with an incredible sense of compassion and a disdain for playing by the rules. I think what readers enjoy about him is he doesn’t suffer fools, and the world is full of fools.”

Child points out that Pendergast was not even the main focus of their first few books. “We realized this Pendergast who started off as a sort of minor character in an ensemble suddenly was taking on prominence in the third novel. That was a surprise to us. Pendergast, with his incredible powerful personality, just took over. We didn’t even know his first name until the fourth novel.”

Preston and Child have shocked readers of the series by their willingness to kill off major characters, most notably newspaper reporter Bill Smithback—a fan favorite in earlier books. “We thought it would be a great chance to show our readers we’re not kidding here,” Child explains. “If Smithback could possibly die, what character in our books is really safe?” But Preston admits: “I’m really sorry we killed Smithback, it’s like a death in the family. If I had to do it again, I wouldn’t do it.”

They’re also known for the incredible support they get from Pendergast fans everywhere.  “People love Pendergast, and they know more about Pendergast than we do,” Preston says.
“A lot of times we’ve gone to our knowledgeable fans and asked them about Pendergast. What does Pendergast think about opera? ‘Oh, he hates opera.’ We forgot it, but our fans didn’t.” 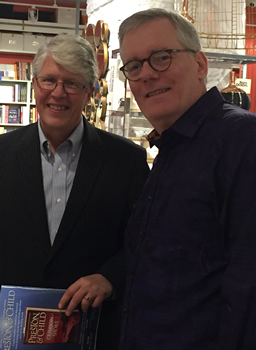 In addition to the Pendergast series, Preston and Child have produced the Gideon Crew series and also written many books on their own—including fiction standalones for Child and non-fiction books about topics as diverse as archeology and the Amanda Knox murder trial for Preston.

So how does it work when they’re writing together? The pair—who live in different parts of the country—exchange ideas, pages, and edits online and by phone. When they do get together, they say they rarely work. It’s mostly just gossip and chit-chat.

Next up is another in the Gideon series (expected to be the last); a new Pendergast thriller; plus an idea they’re working on for a new series about one of the characters in the Pendergast world.

Child says they always have one goal: “We try to make the writing process as much fun as possible and always keep in mind that we’re writing a book we would want to read ourselves. We don’t set out to write a bestseller. I think our readers respond to that.”