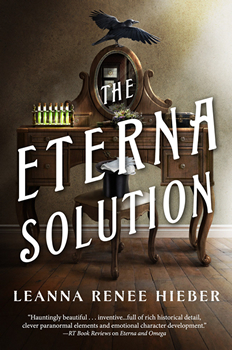 Leanna Renee Hieber brings Victorian London and New York to life and fills both cities with ghosts and monsters. Two groups of paranormally talented investigators discover that the Eterna compound—thought to be the key to immortality—is, instead, a powerful protective charm. That protection is sorely needed, for both England and the U.S. are under attack by dark forces.

Having vanquished the demonic pretender to the British throne, the now-united forces of the Eterna Commission and the Omega Department reach America ready to take on a new menace. But like the United States itself, this evil is rapidly spreading from sea to shining sea. Will the new magic our heroes have discovered be strong enough to defeat it?

I want readers to be drawn into a secret history that is both alluring and horrifying. I want diverse identities to see themselves in these characters striving for a better world in their chosen families. I want women to feel empowered by my female-driven narratives. I want to entertain and drop titillating tidbits of New York history.

I’m deeply invested in psychological thrillers with emotional impact. I am committed to putting many different types of people in peril with an incredible group of colleagues who use their talents, determination and steadfast respect and love to get them out of wild and unexpected circumstances. I want to be as inventive with spiritual exploration as I am with dangerous plots.

There were many historical aspects I had to tweak slightly to fit my narrative but there are fascinating and maddening parallels to our modern age. My characters are struggling for rights and representation just as so many vulnerable and targeted groups are doing over a century later. It’s mind-boggling to think of the progress and stagnation at the same time.

Come hang out with a motley crew of wild talents. Find yourself in new relationships with quirky people who discover new gifts and talents that merge natural Magic into a modern world. I am all about the dynamics of a complicated team full of difficult and often over-the-top personalities all fighting for a more positive future.

Edgar Allan Poe is my north star, the author who first gave me a sense of ‘voice’. Anne Perry is a god of setting and character, I learn so much about heart and history from her. Guillermo del Toro is everything. His vision and merging of history and fantasy is exactly the kind of synthesis I strive for. 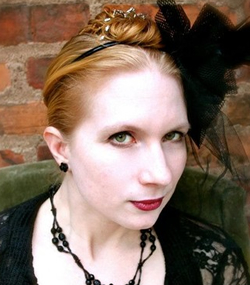 Leanna Renee Hieber is an actress, playwright, artist and the author of a dozen Gothic, Gaslamp Fantasy novels for Tor Books and other publishers. Her Strangely Beautiful saga was a Barnes & Noble bestselling series, won 3 Prism awards for excellence in the genres of Fantasy and Romance, and her YA debut Darker Still was a Daphne du Maurier finalist. A proud member of performer unions AEA and SAG-AFTRA, she has appeared in film and television on shows like Boardwalk Empire and Mysteries at the Museum. A proud Goth and licensed New York City ghost tour guide, she is a frequent guest lecturer at conventions nationwide and at institutions like New York University, and a passionate public speaker about the history and importance of Gothic literature.

To learn more about Leanna, please visit her website.