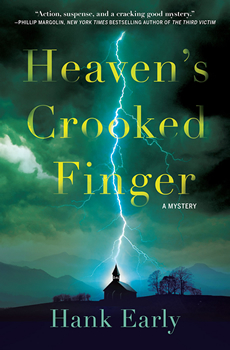 Earl Marcus thought he had left the mountains of Georgia behind forever, and with them, the painful memories of a childhood spent under the fundamentalist rule of his father RJ’s church–a church built on fear, penance, and the twisting, writhing mass of snakes. But then an ominous photo of RJ is delivered to Earl’s home. The photograph is dated long after his father’s burial, and there’s no doubt that the man in the picture is very much alive.

Enjoyment and satisfaction for starters. Beyond that, I’d say a little insight into the way people are driven to embrace faith even when it harms them.

HEAVEN’S CROOKED FINGER takes readers to a world that is still relatively unexplored in crime fiction: the southern Appalachians viewed through the lens of religious extremism. It also brings in elements of horror and straddles the line between reality and the supernatural. Or at least I hope it does.

The lightning on the cover of the book is more than just for atmosphere. It plays a pretty major role in the story.

My two all-time favorite authors are Stephen King and James Lee Burke. I’d like to think my novels fall somewhere in the sweet spot between those two guys. 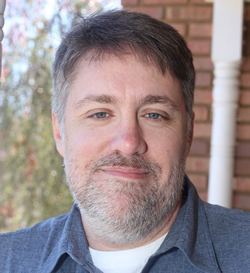 Hank Early is the pen name for horror author John Mantooth, whose previous novel The Year of the Storm was nominated for a Bram Stoker Award. These days, he lives in central Alabama with his wife and two kids, where he writes crime, watches too much basketball and rarely sleeps.

To learn more about Hank/John, please visit his website.