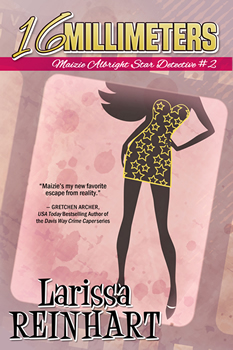 In continuing her career-makeover quest as a for-real detective, ex-teen and reality star Maizie Albright has a big learning curve to overcome. Her chosen mentor, Wyatt Nash of Nash Security Solutions, would rather stick Maizie with a safe desk job. But Maizie’s got other plans to help Nash. When a major movie producer needs a babysitter for his hot mess starlet, Maizie eagerly takes the job. But when her starlet appears dead and then not dead, Maizie’s got more than an actress to watch and a missing corpse to find. Maizie’s hunting a killer who may be a celebrity stalker. And Maizie might be the next celebrity who gets snuffed.

Author Larissa Reinhart was kind enough to spend some time with The Big Thrill discussing her latest novel, 16 MILLIMETERS:

Humorous mysteries / chicklit mysteries straddle the line between the cozy mystery genre and women’s fiction. I hope this series adds to that growing market.

I started this series because of the growing TV and movie industry in my home state of Georgia. Georgia has outranked California and New York for the number one spot for filming. I began writing 16 MILLIMETERS while my family was living in Japan and moved back to Georgia as I was finishing the book. Prices have risen, competition for housing has grown, and traffic has gotten crazy. I think my feelings on living in the center of this movie bubble has had a mixed reaction that worked its way into the story. Maizie Albright is still the earnestly optimistic ex-star trying to overcome her past to fit into her small-ish Georgia resort town as a detective, but I find her (and other characters’) reaction at the way the film industry has impacted their town growing more negative. This book is edgier than 15 MINUTES and deals with more controversial subjects than traditional cozies.

The relationship between Maizie Albright and Wyatt Nash, her mentor and boss, is evolving. There’s a stronger attraction between both characters than the crush she had in the first book. And there’s another possible romantic interest for Maizie introduced in the second story. 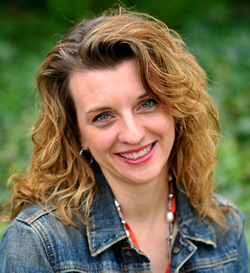 Larissa is a 2015 Georgia Author of the Year Best Mystery finalist, 2014 finalist for the Silver Falchion and Georgia Author of the Year, 2012 Daphne du Maurier finalist, 2012 The Emily finalist, and 2011 Dixie Kane Memorial winner. Her work also appeared in the 2017 Silver Falchion Reader’s Choice winner, Eight Mystery Writers You Should Be Reading Now. Larissa’s family and Cairn Terrier, Biscuit, have been living in Nagoya, Japan, but once again call Georgia home. See them on HGTV’s House Hunters International “Living for the Weekend in Nagoya” episode.

To learn more about Larissa, please visit her website, find her chatting on Facebook, Instagram, and Goodreads, and be sure to join her newsletter for a free short story.