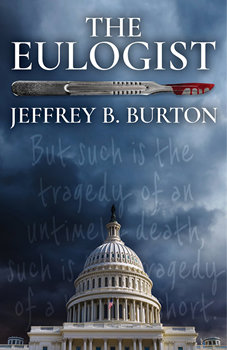 FBI Special Agent Drew Cady is reluctantly drawn into investigating the assassination of a sitting United States senator. Strangely, the senator’s death is linked to a murdered Baltimore junkie with an identical M.O. – a single stab wound to the heart and a typed eulogy left at the scene.

As Agent Cady deals with a professional hit man known only as the Canadian, a breakthrough Alzheimer’s drug, a misanthropic hacker, and a Mexican drug cartel, he peels back the layers of deceit and comes to realize that even the reddest of red herrings can bite. And unfortunately for all involved, the killings have just begun.

THE EULOGIST author, Jeffrey B. Burton, recently met with The Big Thrill to discuss his latest novel:

Mystery aficionados are razor-sharp. I’m hoping THE EULOGIST is able to pull the rug out from under them a time or three. That’s what I love in a good mystery—unexpected twists and turns—more fun than a ride at the state fair.

The novel touches on a rather unique relationship—an unusual friendship—between the president of Aadalen Pharmaceuticals and the east coast head of a Mexican drug cartel. They come to view each other as opposite sides of the same coin. I did some research into Mexican cartels, and how they’ve come to dominate the US illicit-drug market. I also looked at the costs incurred in bringing new drugs to market…and with funds like that floating about, the table is all but set for murder.

I was one of ThrillerFest’s Best First Sentence winners in 2015 (Jennie chewed through relationships like a teething puppy), and, as a result, Grant Blackwood was kind enough to edit the first couple chapters of THE EULOGIST. Grant had some excellent words of advice and I tweaked the novel using each and every one of his suggestions.

As for my winning sentence, it appears in THE EULOGIST (though not as the first sentence and it has been slightly modified).

I can’t count the number of vacations that have been stolen from me by the likes of Lee Child, Michael Connelly, John Connolly, Brad Taylor, John Sandford, Barry Eisler, Gillian Flynn, Brian Haig, etc. Instead of hiking or swimming, camping or fishing, barbecuing or just plain merrymaking with my loved ones, I’m superglued to one of their page turners and before I know it—poof!—the vacation’s over. The authors I’ve listed should send me to Maui for a year or two in order to make up for what they’ve done. Hopefully, as an author, I can mess up some readers’ vacations. There’s really no higher compliment. 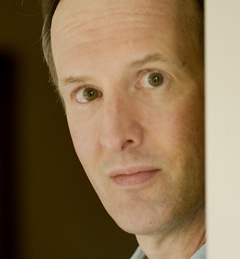 Jeffrey B. Burton was born in Long Beach, California, grew up in St. Paul, Minnesota, and received his BA in Journalism at the University of Minnesota. Novels in Burton’s Agent Drew Cady mystery series include The Chessman, The Lynchpin, and THE EULOGIST. His short stories have appeared in dozens of magazines. Jeff is a member of International Thriller Writers (ITW), the Mystery Writers of America (MWA), and the International Association of Crime Writers. Jeff lives in St. Paul with his wife, daughter, and an irate Pomeranian named Lucy.