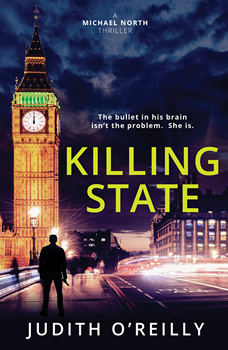 The bullet in his brain isn’t the problem. She is.

Michael North is a hero, with a bullet in the brain to prove it. A bullet which has rewired his neural pathways and heightened his sense of intuition.

A bullet which is driving him mad.

Working for an extra-governmental agency called The Board, North knows one thing for sure.

He is very good at killing very bad guys.

But what happens when a hero is ordered to kill a good woman rather than a bad man? Because it turns out that rising political star Honor Jones, MP can’t stop asking the right questions about the wrong people.

Not least because he’s running out of time. North always knew the bullet in his brain would kill him.

Then again, what if he’s wrong? What if it’s not the bullet, but Honor Jones who’ll be the death of him?

Judith O’Reilly, the bestselling author of KILLING STATE, spent some time with The Big Thrill discussing her first novel:

There are a tremendous number of domestic psychological thrillers around. Some of them are fantastic. But not all. There’s an argument that I should have written one and gone where the market is, but where’s the fun in that?

I think this is a very political time. Post Trump. Post Brexit. Everything is in play and I wanted my thriller to reflect that. Internment. Hacking. Domestic unrest. The drift to the right. Nano-drones. I wanted to take an all-action hero and drop him into a political world where everything was at stake, and see what happened.

To my surprise I realized that it’s really a book about morality and mortality. My hero is carrying around a bullet in his brain. He doesn’t know if it’s rewired his neural pathways or it’s driving him mad. I didn’t know till the book was finished that really I was writing about the fact that we are all going to die and we have to reach an accommodation with that. I lost a son in 1999. He was stillborn. You live with a tragedy like that, because you have no choice. You live with the fact of death. Turns out that’s exactly what I had to write about – how we all have to live with the fact we are going to die. You have to write what’s inside, I guess. Who’d have thunk it?

The book’s hero is a roughty-toughty bloke. He’s 27 and ex-army and he’s been working as an assassin for an extra-governmental agency. There’s lots of action in the book. Fights, guns, helicopters, bad guys and a little bit of torture, but actually the women in the book are critically important. Their own characters and the relationships my women have with each other are as important as any relationship my hero has with them. The central female character is in trouble because she won’t stop looking for her best friend who has disappeared, for instance. There is a kick-ass teenage girl called Fangfang who you definitely want on-side and a great bar-owner (and mother from Hell) called Stella. My women are active players in the novel.

It’s very hard to get away from the influence of Lee Child when you’re constructing an action hero (even when you are thinking about covers, frankly). My hero is young and British, but he’s big and tough and ex-army. He’s more reckless than Jack Reacher and more damaged by his upbringing. But I absolutely love Lee Child’s work – I absolutely love the clarity of his writing as well as his hero – and I’m not going to be anything other than flattered, if anyone at any point says they like it and it’s “a bit like Lee Child.” I would definitely take that.

John Le Carre and Robert Harris are both influencers. They are both great writers style-wise, and I’ve also learned a lot from James Patterson in terms of what it takes to keep people reading.

I’ve read my entire life (as have most writers, I think). I used to stop off in Leeds market and buy second hand books on my way home from school, read them and then sell them back the next day. I went through all the Jean Plaidys (in all her various disguises), the Agatha Christies, you name it and I read it.

I love Raymond Chandler and Travis McGee, James Ellroy, and Dennis Lehane. Val McDermid, Kathy Reichs, and Gillian Flynn can do no wrong in my eyes. Margaret Atwood is another big icon of mine and has been ever since I was 18 and spent six months in Canada. Probably the strangest book to influence me is the Catholic Encylopeadia of Saints. We had it in the house as a kid and it was full of martyrdom and gothic deaths. It’s a wonder I could sleep at night. 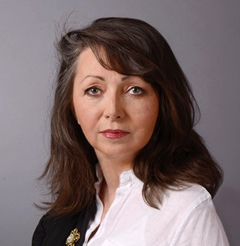 Judith O’Reilly is the author of Wife in the North and A Year of Doing Good (both published in the UK by Viking Penguin, 2008 and 2013 respectively). Wife in the North reached number three in the UK bestsellers’ chart and was in the top ten for five weeks. It was also a top ten bestseller in Germany and was published by Public Affairs in the US. It sold into ten countries, was serialized by The Sunday Times and the Daily Telegraph, was a BBC Radio 4 Book of the Week, and was based on Judith’s eponymous blog, which was named as one of the top 100 blogs in the world by The Sunday Times. Judith’s blog is credited with kicking off the popularity of domestic blogging in the UK.

Wife in the North and A Year of Doing Good were both non-fiction. KILLING STATE is a commercial political thriller and Judith’s first novel. At least the first one she’s allowed to leave the house without her.

Judith is a former political producer with BBC 2’s Newsnight and ITN’s Channel 4 News, and a former education correspondent with The Sunday Times, where she also covered politics, undercover reporting and general news. She still writes for The Sunday Times, and has acted as a strategic communications adviser for both government and business.

To learn more about Judith and her work, please visit her website.