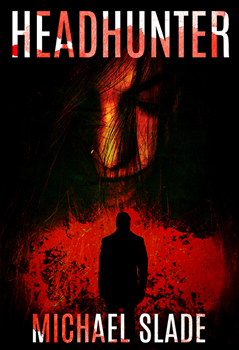 Few authors revisit their debut after it’s published—at least not beyond typical nostalgia for it being the first. But Michael Slade has not only cracked the spine on his first thriller, he’s completely gutted and re-imagined it, giving it new life not only on the bookshelf as a limited hardcover, but also coming to the small screen in 2018 as an eight-part TV mini-series.

HEADHUNTER, first published in the 1980s, is a horrific tale that grew out of his pioneer ancestors’ frontier history with the Wild West Mounties, his mom’s 1944 adventures in “the Land of the Headhunters,” the death of Slade’s dad when Slade was nine and the crisis that produced, along with ten years of practicing criminal law with modern-day Mounties in a hundred murder cases—many involving insanity.

“When e-books came along, the paper edition was scanned into a Word file. That gave me the opportunity to re-imagine the story the way it would have been written back then had I known what I know now,” Slade says.

“My pre-law studies were in modern history. It takes thirty years, a professor said, to objectively understand current events. Because HEADHUNTER captures my real-life homicide experiences in the sexual underground of Vancouver during the Sexual Revolution, and thirty years have passed since its original publication, there was more to write in the horrific plot of my most personal novel.”

No way could Slade leave the book in a form that, in his opinion, wasn’t his best. So he dropped every other project—including the fifteenth novel in his Special X series—and carved out two years to completely re-conceive his first “Mountie noir” thriller. This month, a legion of fans is frothing at the mouth to get their hands on an updated novel that—even back then—was both terrifying and disturbing.

Slade took some time to talk to The Big Thrill about the story that ignited his writing career and first brought him to the attention of horror fans.

As a fellow Canadian (and former BC girl with huge ties to Vancouver), I loved the geographical references. But I also loved the “education” you’ve given the reader on the Royal Canadian Mounted Police. How has this book been received in that regard?

Worldwide interest in the Mounties has never been a problem, right from the formation of the force in 1873.

Canada is the only country known first and foremost for its police. After the Coca-Cola logo, the red uniform of the Horsemen’s Red Serge [as the Mounties are sometimes called] is one of the most recognized “brands” around the world. The myth of the Mounties is largely an American creation (including the iconic motto “The Mounties always get their man”), so from the first book, Americans have been “Sladists.”

Hollywood has a name for its hundreds of Mountie movies: “Northerns.” They go back as far as Riders of the Plains, filmed in 1910 by the Edison Company, a firm founded by the inventor of the motion picture camera, Thomas Edison.

In the 1930s, American listeners sat glued to their radios O. J. Simpson–style to follow the Mounties dogsled-chasing a cop killer dubbed the Mad Trapper of Rat River across the Arctic. Next came several American comic books like Zane Grey’s King of the Royal Mounted and the American TV show Sergeant Preston of the Yukon. And so on.

Though I write in the Mountie subgenre, HEADHUNTER is the antidote to all that stereotypical, straight-arrow stuff.

It could have gone either way, but you’ve received tremendous support from the Mounties. What has that support meant to you?

When I wrote HEADHUNTER in the early 1980s, I had defended hundreds of trials against the Horsemen. That made me a mouthpiece for their “bad guys,” and researching Mountie lore for that thriller had me pressing my nose and fingers against the windows of their barracks.

After the book was published, a newspaper asked a local Mountie inspector what he thought of my thriller—no doubt hoping he would slag me and get a fistfight going. Instead, he gave it a good review, and said he was impressed that I got the uniforms right. (The Mountie manual on what to wear when is a thick volume indeed.)

When I phoned to thank him for being magnanimous, the inspector offered to put me in contact with any internal sources that could help with my research. Consequently, the series’ forensics are done in the Mounties’ lab, I’ve flown, boated, and driven around with Horseman patrols, I’ve been to the Red Serge Ball, addressed regimental dinners, and I’ve written two real-life psycho-hunters into Special X.

For the historical action in the 1800s, it helps that my great-grandfather was the first mayor and judge of the settlement (now the city) that grew up around the Mounties’ stronghold of Fort Calgary. Not only did I hear all the tales passed down from him, but he kept a detailed diary that’s now in Canada’s National Archives.

I’m fascinated by how closely connected the characters and details are to events that have happened in your life. Why?

When I teach thriller writing, the first question I ask students is: “What’s the worst thing that ever happened to you? And how are you using that to power your fiction?”

“Write about what you know” is the mantra of every fiction writer, and the worst event in your life will by definition have your strongest emotions. If you capture only fifty percent of that in your story, it will still ring true to readers as the straight goods.

I owe the success of HEADHUNTER to baring my worst personal horrors. Here—with photos and stories—is “The History of Michael Slade and Headhunter Reimagined.”

I’m a kinetic person. After years of dramatic theatrics in the hurly-burly of the criminal courts, retreating alone to a writer’s desk to dream up thrillers would bore me to death. Far more exciting to live my plots before I write them down, so I fly somewhere that sparks my imagination and put myself in a situation—often with a calculated danger—to experience and record the resulting thrills and chills.

In other words, I encourage my stories to write themselves.

I’m always fascinated by “lawyers turned novelists”—maybe a bit envious too because the fictional fodder is so ripe for the taking. What sparked the transition for you?

Practicing criminal law is the ideal training to become a thriller writer. Every crime starts with a motive. That motive determines the victim, how the crime is committed, and what crime scene is left behind for cops, forensic techs, and profilers to work.

I’m in awe of writers who start a book and don’t know where they’re going. I would probably suffer a nervous breakdown. I begin with the motive and the last line in the thriller before I plot from back to front. My outline is usually a hundred pages, divided into chapters.

Next, I tack a roll of paper around the walls of my writing den and mark off a horizontal line with the chapters. Then each chapter is given a tension rating from one to five so that I can see how “thrilling” the plot is. The result looks like a stock market or earthquake chart. If two chapters go by without reaching four, I take Chandler’s advice and “have a man come through the door with a gun.”

The catalyst to write HEADHUNTER was an economic recession that sent interest rates past twenty percent. The provincial government slashed funding for legal aid, so I used the doldrums as an opportunity to write out unresolved issues from my father’s death.

The definition of horror has gone through a bit of an evolution, but to me, Michael Slade is horror. How would you say the genre has changed, and have you had to adapt?

I was born into the glory days of EC Comics before the jackboot of censorship squashed them: Tales from the Crypt, The Vault of Horror, The Haunt of Fear, Crime SuspenStories, and Shock SuspenStories. EC’s legendary Madmen—Bill Gaines and Al Feldstein—literally taught me to read.

This quote from Time Out captures the early evolution of my fantasy world: “A thin line separates crime and horror, and in Michael Slade’s thrillers, the demarcation vanishes altogether.”

The most influential novel I’ve read is Stevenson’s Strange Case of Dr. Jekyll and Mr. Hyde. Not only is it a classic horror story, but the twist is also behind every whodunit and almost all murder trials.

What divides “the supernatural” from “Grand Guignol macabre” is its break with reality. Psychotic killers also suffer a “break with reality,” so there’s no need for me to adapt to shifting trends. I can feed the supernatural into real-life crimes by incorporating whatever monsters interest me into my psychos’ warped psychology.

I do, however, slip into the supernatural every Halloween, when—for the past ten years—I’ve produced Michael Slade’s Shock Theatre, starring fellow thriller writers. 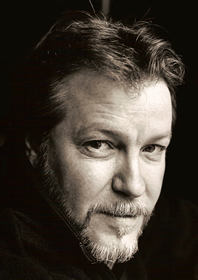 Criminal lawyer Michael Slade has acted in over a hundred murder cases. He specializes in the law of insanity, and argued the last hanging case in the Supreme Court of Canada. Reader’s Digest says: “The Slade books have developed a strong following among police officers because of their strict adherence to proper police procedure.” Slade was guest speaker at the international Police Leadership Conference and at several RCMP regimental dinners, and was guest of honor at the World Horror Convention in Seattle. HEADHUNTER will be filmed as an 8-part TV series by veteran producer Rob Merilees (CAPOTE, “Motive”) and D Films.