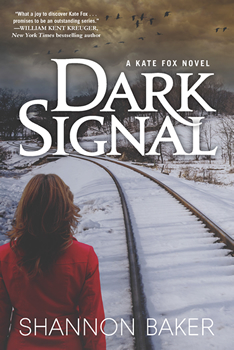 Reeling from her recent divorce, Kate Fox has just been sworn in as Grand County, Nebraska Sheriff when tragedy strikes. A railroad accident has left engineer Chad Mills dead, his conductor Bobby Jenkins in shock. Kate soon realizes that the accident was likely murder.

Who would want to kill Chad Mills? Kate finds that he made a few enemies as president of the railroad workers union. Meanwhile his widow is behaving oddly. And why was his neighbor Josh Stevens at the Mills house on the night of the accident?

While her loud and meddling family conspires to help Kate past her divorce, State Patrol Officer Trey closes in on Josh Stevens as the suspect. Kate doesn’t believe it. She may not have the experience, but she’s lived in the Sandhills her whole life, and knows the land and the people. Something doesn’t add up—and Kate must find the real killer before he can strike again.

The Big Thrill caught up with Shannon Baker to discuss her latest novel, DARK SIGNAL:

First and foremost, I want readers to be entertained. I want to take them out of their everyday and sink them into the Nebraska Sandhills, where things are just a bit different than anywhere else. I want them to make a friend in Kate Fox, enjoy her journey. Laugh a little, worry a little, puzzle a little. It’s what I always want when I read.

As with Craig Johnson, C.J. Box, and Terry Shames, I love giving readers a real sense of the west. But I also love bringing them that view from a woman protagonist. Kate’s not “kick-ass,” but she’s Western savvy. A deep-rooted sunflower as opposed to a steel magnolia.

I learned quite a bit about trains and train crime. A bit of trivia that surprised me is that during the winter, they never shut off a train engine. Even if it sits in the yard for a week, they keep it running because they have no anti-freeze.

My husband was a conductor on the BNSF Railroad for 42 years. He hated talking about the details of his job, so I really didn’t know much about what he did. I originally thought to have some kind of corruption with the administration, having heard lots of complaints over the years, but when I got a few of his BNSF buddies together to brainstorm, the conversation went in a different direction. It was fun and more than a little disturbing that when I asked my husband how I could kill someone on a train, he popped off with more than one answer, complete with the hardware I’d need, dimensions and how to install it.

I’m a huge fan of William Kent Krueger. He writes with warmth and authenticity. Of course Craig Johnson, because of his humor and the rural western setting. Currently, I’m devouring Lori Rader-Day and Catriona McPherson’s standalones to figure out how they create such suspense and compelling characters. 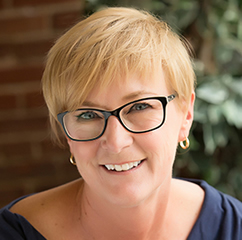 Shannon Baker is the author of the Kate Fox mystery series, set in the isolated cattle country of the Nebraska Sandhills. She was voted Rocky Mountain Fiction Writers’ 2017 Writer of the Year and Stripped Bare earned the author a starred review in Library Journal (as their Pick of the Month) and a nomination for the 2016 Reading The West Award from Mountains and Plains Independent Booksellers. She also writes the Nora Abbott Mysteries (Midnight Ink), featuring Hopi Indian mysticism and environmental issues inspired by her time working at the Grand Canyon Trust. Shannon makes her home in Tucson where she enjoys cocktails by the pool, breathtaking sunsets, a crazy Weimaraner, and killing people (in the pages of her books).