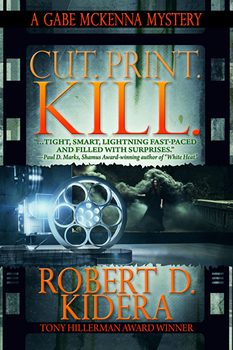 Reeling from family betrayal and tragedy, Gabe McKenna charts a new course as historical consultant on a motion picture filming in New Mexico. Before you can say “Action!” he is entangled in a web of illusion and deceit, where death plays a starring role. With the help of The Onion, a private investigator and long-time friend from New York, Gabe peels away layer after layer of dishonesty, battles brutal drug cartels, is accused of murder, and must unmask a mysterious, seductive woman to reveal the truth in a world full of lies.

I hope my readers will be captivated by this story and enjoy its rich cast of characters and diverse circumstances. I hope they will see my protagonist Gabe McKenna as a man capable of rising from defeat, courageous against daunting odds, a man with a code of decency in a world that often doesn’t care. My Gabe McKenna books are ultimately hopeful tales. As life goes on and batters us, as we may grow cynical and lose some innocence along the way, there is ultimate vindication in Truth and in the love we give and receive.

In CUT. PRINT. KILL. I attempted to create a contemporary mystery with some of the flavor of classic noir, and blend in elements of tragedy, comedy, and social commentary. As part of a series, I have also tried to develop my characters in ways that the reader can connect with and understand. It is a story in which everyone wears a mask, illusion and reality seem nearly interchangeable, and my protagonist can only get to the truth after wading through a lifetime of lies.

Yes. My characters do not always behave as I intend. This novel was a more difficult story to complete for that reason. I finally reached an understanding with one of the main characters. She and I had to work things out before the novel could be completed.

The story is never over. Not even when it ends. Unresolved threads are the fabric of future novels in this series.

The authors who have influenced and inspired me the most are Raymond Chandler, Donald Westlake, and Lawrence Block. Chandler was a world-builder who transported his readers to another place and time. His hero Philip Marlowe is for me the icon of the noir hero. Donald Westlake intrigued and entertained at once. His use of humor in his mystery novels adds another dimension to the mystery reading experience. Lawrence Block shows me that it is possible for a hero to be deeply flawed and yet noble in his own way. I owe a great debt to all of these authors. 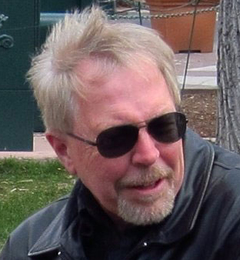 Robert D. Kidera’s debut novel Red Gold earned the Tony Hillerman Award as Best Fiction of 2015 at the New Mexico/Arizona Book Awards. It was also named as Best Mystery of 2015 and the best eBook. Its sequel, Get Lost, also was awarded Best Mystery of 2016 and Best eBook of 2016 at the NM/AZ Book Awards. The third Gabe McKenna Mystery, CUT.PRINT.KILL. debuted in September of 2017 from Suspense Publishing. The entire series is also available in audio format at Audible.com.