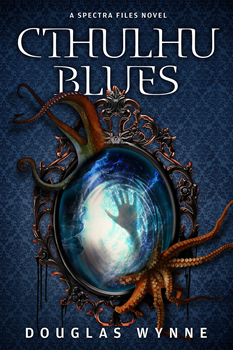 The Wade House has been reduced to ash, but the dreams that plagued Becca Philips and Jason Brooks when they slept in that abomination continue to haunt them. After years of facing trans-dimensional monsters in the service of SPECTRA, a few lingering nightmares are to be expected. But when Becca starts singing in her sleep—an ancient song that conjures dreadful things from mirrored surfaces—she fears that the harmonics she was exposed to during the Red Equinox terror event may have mutated not only her perception, but also her voice. It’s a gift—or curse—that she shares with a select group of children born to other witnesses of the incursion.

While a shadowy figure known as the “Crimson Minstrel” gathers these children to form an infernal choir, something ancient stirs on the ocean floor. And Becca, hearing its call, once again finds herself running from an agency she can no longer trust, into the embrace of cosmic forces she can barely comprehend.

First and foremost I hope readers will enjoy being swept away by a weird adventure story that gives them a real sense of dread for characters they care about. Beyond that, I hope it raises a question or two about the value of humanity in the face of the cosmos. What defines us and possibly makes us unique? What makes us worth saving from chaos and environmental catastrophe?

The SPECTRA Files trilogy pays homage to H.P. Lovecraft’s cosmic imagination while bringing his Cthulhu Mythos into the age of high-tech counter-terrorism and using that juxtaposition as a means to examine how little our tribal fears have changed over the past century. The books deliberately defy Lovecraft’s own prejudices in focusing on a female lead and a racially diverse cast, and go against the grain of his style with brisk thriller pacing. My aim was to embrace these very trendy tentacled monsters without lapsing into cliché or mere pastiche and to take full advantage of their philosophical implications.

In each of these novels, I’ve employed some cool landmarks and architectural features from the real world. The one that fascinated me this time was the Sea Organ of Zadar, Croatia. This is a giant musical instrument built into the steps leading down from the old city to the Adriatic Sea. The waves rolling into its chambers produce haunting chords and melodies.

It’s loaded with Easter eggs, and not just for fans of Lovecraftian fiction. You don’t have to get all of the references to follow the story, but there are all kinds of fun little nods to my favorite horror writers, to various systems of occultism, and to the great city of Boston.

The books that made me want to be a writer were the epic tomes of horror and dark fantasy: The Stand by Stephen King, Imajica by Clive Barker, and Shadow Land by Peter Straub. Also short fiction with a lyrical quality, especially Bradbury and Lovecraft. Ironically, becoming a writer has been a process of streamlining my own prose and developing an appreciation for tighter stories. These days I’m more influenced by my contemporaries. People like Paul Tremblay, Rio Youers, and John Langan to name a few. 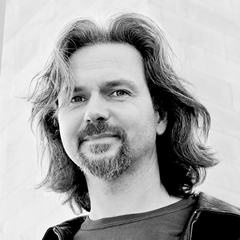 Douglas Wynne wrote his first dark fantasy novel at the age of fifteen but has never found the courage to take it down from the attic and read it. After a long detour through rock bands, and recording studios, he came full circle back to fiction writing and is recently the author of five novels: The Devil of Echo Lake, Steel Breeze, and the SPECTRA Files trilogy (Red Equinox, Black January, and CTHULHU BLUES). He lives in Massachusetts with his wife and son and a house full of animals.