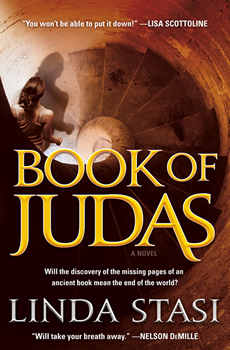 New York City reporter Alessandra Russo is pulled into yet another intrigue; this time her friend Roy inherits a strange religious manuscript, tightly protected in a mysteriously locked tube. Rumors run rampant that these are missing pages from a rotted codex, the heretical Gospel of Judas, which postulated that Judas was not the betrayer, but the beloved of Jesus. Alessandra’s interest in the manuscript is truly piqued when she is faced with tragedy no mother should experience, and must track down the missing pages of the Gospel to set things right.

Do the lost pages reveal a secret that will challenge Christianity’s very belief about the creation of life, or even the power to unleash Armageddon? What if such explosive documents fell into the hands of modern-day terrorists, dictators, or religious fanatics? Can Alessandra crack the code and learn what the Gospel of Judas is truly saying to the faithful?

During her investigation, Alessandra is plunged into a dark world of murder, conspiracy, sexual depravity, and most importantly, a race against the clock to save her own child.

Author Linda Stasi took time out of her busy schedule to discuss her novel, BOOK OF JUDAS, with The Big Thrill:

What I really hope for is that readers will rethink the whole Judas story. The accepted gospels —as opposed to the Gnostic gospels—which were hand-picked for inclusion in the Bible by Constantine and his council rejected any gospels that didn’t fit their agenda. They rejected all works that in any way humanized Christ and Christ’s very personal relationship with Judas. I just hope BOOK OF JUDAS will make people question what we’ve always accepted as, well, gospel.

Alessandra Russo, the protagonist, as readers may remember from her first appearance in The Sixth Station, is everything they told me a female heroine in a thriller shouldn’t be: over 40, flawed, funny and not a gorgeous six-foot blonde model/assassin. She is as real as you and me—unless you happen to be a six-foot blonde model/assassin. I got heat from some editors who wanted her to fit the stereotype instead of a real human type.

Everything was new. Let’s start with the fact that the lost Gospel of Judas, a codex unearthed in a cave in Egypt in the 1970s and lost for years on the black market, contains what none of the other gospels contain: the spiritual and esoteric teachings of Jesus to Judas about the universe and other realms of reality. I also came to realize that Judas would never have had to “reveal” Jesus’ whereabouts in the Garden because Jesus was a public figure who had even announced where he would have what turned out to be the Last Supper.

Alessandra has given birth to a son by Yusef Panera, her mysterious lover—the man she saw perish in a church during an earthquake. Or did he?

Nelson DeMille influenced me from the first time I picked up one of his books because he is a brilliant author who can tell a serious, grab-you-by-the-throat-and-not-let-you-go-tale and still make you laugh at the same time. Another is definitely Susan Issacs, who was among the first authors to give us real flesh and blood female protagonists who were, and are, funny, flawed and fantastic. I devoured everything both authors ever wrote—never thinking that one day I would call them friends. 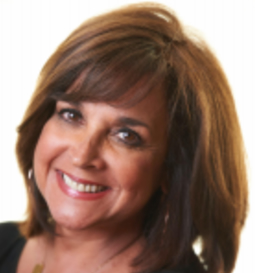 Linda Stasi, the popular and well-read columnist for the New York Daily News, and previously for the New York Post, has also been an on-camera TV co-host with Mark Simone for the past 18 years on NY 1 – Spectrum’s “What a Week!”

She was named “One of the Fifty Most Powerful Women in NYC” and has won numerous awards. She is a two-time winner of Best Column by the Newswomen’s Club of NY, Best Humor Columnist, and named Woman of the Year by the Boys Town of Italy for her charitable work such as driving a tractor-trailer in an 18-truck convoy from NYC to the gulf states with hurricane relief supplies.

Stasi has appeared on TV talk shows and news channels such as The Today Show, Good Morning America, Hardball, Good Day New York, The O’Reilly Factor, and The View, as well as CNN, Fox News, MSNBC news shows, and many others. She has appeared several times on Coast to Coast with George Noory and is a regular guest on I Radio’s nationally broadcast Mark Simone Show, and countless others around the country.

Brash, funny and opinionated, the acerbic Stasi’s first novel, The Sixth Station, published in January of 2013 by Forge Books, was hailed as “A helluva religious thriller” by Nelson DeMille, while Steve Berry said, “You’ll be grabbing the pages so tight your knuckles will turn white!” Booklist said of the book, “Dan Brown and Steve Berry fans have another controversial novel in which to lose themselves.” For The Sixth Station, Stasi was selected as a finalist for the Mary Higgins Clark Award.

She is also not afraid to say what’s on her mind in her popular Wednesdays and full-page Sunday columns in the New York Daily News, which has a print readership of more than 650,000 on Sundays, and millions of digital readers daily.

Linda Stasi’s husband, Sid Davidoff, has been named to City & State’s “100 Most Powerful,” and they were the first couple ever married by NYC Mayor Bill de Blasio. Her daughter Jessica Rovello was named by INC Magazine as the top CEO of the Best Company to Work For in the USA, Arkadium.