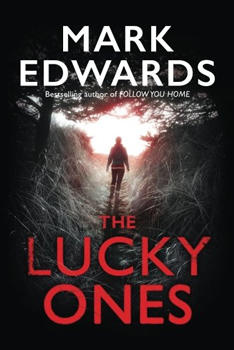 It was the happiest day of her life. Little did she know it was also the last.

When a woman’s body is found in the grounds of a ruined priory, Detective Imogen Evans realises she is dealing with a serial killer—a killer whose victims appear to die in a state of bliss, eyes open, smiles forever frozen on their faces.

A few miles away, single dad Ben Hofland believes his fortunes are changing at last. Forced to move back to the sleepy village where he grew up following the breakdown of his marriage, Ben finally finds work. What’s more, the bullies who have been terrorising his son, Ollie, disappear. For the first time in months, Ben feels lucky.

But he is unaware that someone is watching him and Ollie. Someone who wants nothing but happiness for Ben.

THE LUCKY ONES author, Mark Edwards, spent some time discussing his latest thriller with The Big Thrill:

THE LUCKY ONES features a serial killer who manipulates his victims’ lives to make them happy before he kills them, so they have what appears to be a good dose of luck in the months leading up to their deaths. I want readers to finish the book feeling anxious. What if that recent stroke of luck wasn’t lucky after all? What if you have a twisted guardian angel watching over you? Of course, I also want readers to end the book satisfied that they’ve enjoyed a thumping good creepy read with a surprise or three at the end.

In most psychological thrillers the protagonist gets into increasing trouble and danger as the book progresses. The writer makes them suffer until they have to fight back. In THE LUCKY ONES, I have inverted that: my main character starts at his lowest point—jobless, divorced, caring for a sick mother and bullied son—before things go right for him. Or, at least, they appear to. It’s a neat twist on familiar tropes. It’s also one of the first crime novels to be set in the beautiful county of Shropshire, England, once described as ‘the closest earthly place to paradise’. I love ‘trouble in paradise’ novels and enjoyed making terrible things happen in picturesque places.

The killer in THE LUCKY ONES, known as the Viper, kills his victims by injecting them with an overdose of morphine. This is because he wants them to die as painlessly as possibly. I spent a lot of time researching the effects of morphine and was surprised to find that it is essentially exactly the same as heroin, only with a medical respectability. It’s also a highly controlled substance and very difficult to get hold of, especially since the UK’s most prolific serial killer, Harold Shipman—a doctor who used morphine to murder scores of elderly people—was caught. I had to figure out how my murderer could get hold of it, which led to a lot of conversations with chemists and paramedics.

Some of the early reviews have commented on how many good characters are in this book, including some minor players. There’s a pathologist in THE LUCKY ONES called Karen Lamb who, I think, is one of my best creations. She only appears briefly but she was great fun to write. She gets on rather better with dead people than she does with the living. Her chapters also contain a Thomas Harris joke that I’m very proud of!

I used to read a lot of ‘literary fiction’ in my early twenties – books in which not a great deal happened—until I discovered Michael Connelly and James Ellroy. The first Connelly book I read was The Poet, a superb serial killer novel, before moving on to the Bosch series, which I’m still reading now, twenty years later. The Black Dahlia and The Big Nowhere by Ellroy hit me like a pair of runaway trucks. I was blown away by the sheer ferocity of the language, the dark humour and twisting plot lines. I aim to write books that hit readers in the same way. 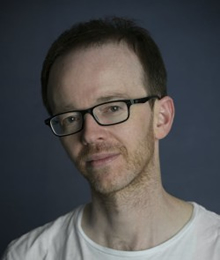 Mark Edwards writes psychological thrillers in which scary things happen to ordinary people, and is inspired by writers such as Stephen King, Ira Levin, Ruth Rendell and Linwood Barclay.

He is the author of four #1 bestsellers: Follow You Home (a finalist in the Goodreads Choice Awards 2015), The Magpies, Because She Loves Me, and The Devil’s Work, along with What You Wish For and six novels co-written with Louise Voss. All of his books are inspired by real-life experiences.

Originally from the south coast of England, Mark now lives in the West Midlands with his wife, their three children, a ginger cat, and a Golden Retriever.