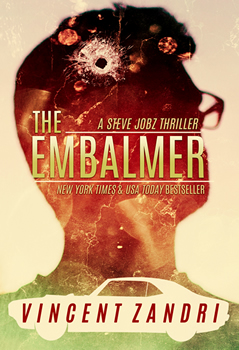 “The Embalmer is dying to meet you…”

You might think that a guy with the name of Steve Jobz would be one lucky man. That he’d be rich and have the world at his fingertips. But instead, Jobz is barely making ends meet at the New York State Department of Unemployment Insurance Fraud. A former cop who was forced to retire early after shooting a young man of color during a convenience store holdup, Jobz has since resigned himself to wasting away his days in a four-by-four cubicle inside an office space that’s more boring than watching the paint dry.

When his overbearing boss calls him in on a job that the Albany Police Department is heading up, Jobz has a chance to get out of the office for a while. But what he doesn’t realize is that he’s about to come face to face with a serial killer who embalms his victims alive. What he is also about to face down is his own worst nightmare come true when that serial killer turns out not to be a stranger.

Author Vincent Zandri took some time out of his busy writing schedule to discuss his latest release, THE EMBALMER, with The Big Thrill:

They can’t wait for the release of the next Steve Jobz thriller.

It is indeed possible to embalm someone while they’re still alive. Not that they will live through the ordeal.

While Steve Jobz is a brand new PI for me, it’s quite possible that more than one Zandri private investigator will make an appearance. Look for Jack Marconi, Dick Moonlight, and even APD homicide Detective Nick Miller. Enough said. 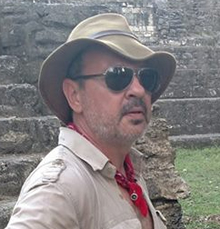 Winner of the 2015 PWA Shamus Award and the 2015 ITW Thriller Award for Best Original Paperback Novel for Moonlight Weeps, Vincent Zandri is the NEW YORK TIMES, USA TODAY, and AMAZON KINDLE No.1 bestselling author of more than 25 novels, including The Remains, Everything Burns, Orchard Grove and The Corruptions. Zandri’s list of domestic publishers include Delacorte, Dell, Down & Out Books, Thomas & Mercer, and Polis Books. An MFA in Writing graduate of Vermont College, Zandri’s work is translated in the Dutch, Russian, French, Italian, and Japanese. Recently, Zandri was the subject of a major feature by the New York Times. He has also made appearances on Bloomberg TV and FOX news. In December 2014, Suspense Magazine named Zandri’s The Shroud Key as one of the “Best Books of 2014.” Recently, Suspense Magazine selected When Shadows Come as one of the “Best Books of 2016.” A freelance photo-journalist and the author of the popular “lit blog,” The Vincent Zandri Vox, Zandri has written for Living Ready Magazine, RT, New York Newsday, Hudson Valley Magazine, The Times Union (Albany), Game & Fish Magazine, and many more. He lives in Albany, New York.