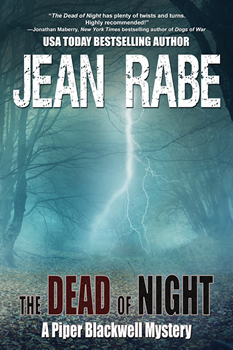 As Sheriff Piper Blackwell rushes to a clandestine meeting with an aging, paranoid veteran who believes spies are trailing his every move, she is caught in a fierce thunderstorm. Pounding rain drums against the bluff, washing away the earth and revealing a grisly secret someone tried to bury a long time ago.

Putting a name to the skeleton on the bluff and searching for the thief who robbed the old veteran of his life’s earnings sends Piper delving into the sleepy towns that dot her rural county. Now she’s digging into pasts perhaps best left alone.

Accompanied by Chief Deputy Oren Rosenberg, Piper seeks to expose a truth someone wants to remain forever hidden. The investigation may have started with a thunderstorm, but Piper aims to finish it and find justice. Uncovering fragments of Spencer County’s history could prove more dangerous—and deadlier—than she ever expected.

Jean Rabe, author of THE DEAD OF NIGHT, recently took time out of her busy schedule to discuss her latest thriller with The Big Thrill:

Small towns have the vibe of being safe. Life is a little slower, less noisy, and most folks know each other. I want my readers to know that nowhere is safe, not even the tiniest of communities. Dark hearts beat everywhere. And the excitement, fear, and danger is just as thick in a “speck on the map” as in a massive city.

It’s accurate in its portrayal of small-town life and the way the sheriff’ functions. I consult with sheriffs, police officers, and district attorneys to make sure Piper Blackwell handles sitations properly and within the parameters of the law. Nothing throws me out of a mystery faster than inaccurate writing about law enforcement. My uncozy-cozies “get it right.”

That writing mysteries are more difficult than fantasy. In my fantasy worlds, I created everything; I made all the rules. In modern-day mysteries I have to be up on politics, geography, changes in the laws, and how gunshot wounds are treated. The time-intensive research surprised and educated me.

I get inspired in my fiction by things I’ve seen and people I’ve met. There is a wonderful character that opens the book, Mark the Shark. He is a compilation of three navy veterans I met at my father-in-law’s apartment building, the youngest of them 89. They told me stories of their navy days on the ship, and on leave. I wove them into one character and added crop circles.

My big influences are in fantasy and science fiction, as those are the genres I started writing in. Gene Wolfe for his cryptic and elegant prose, Andre Norton (who was a good friend) for her incredible imagination, Mike Resnick for his humor and varied approaches to SF, and Joe Haldeman for his vivid worlds. In mystery…I love Michael Connelly. My sheriff Piper Blackwell reads all the Harry Bosch books. 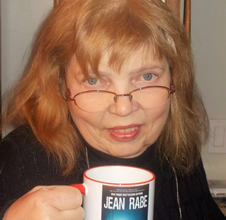 Jean Rabe is the author of 38 novels, more short stories than she cares to count, and has edited magazines and anthologies. She’s new to the mystery field, as her earlier works were in fantasy and science fiction. THE DEAD OF NIGHT is her second Piper Blackwell book, an uncozy-cozy with a big dash of police procedural thrown in. The first, The Dead of Winter, was released in 2016. Jean attends game conventions, works as a mentor for graduate-level writing students, and tosses tennis balls for her dogs in her spare time. She makes sure she has spare time for three or four toss sessions a day.