Coming Through the Darkness 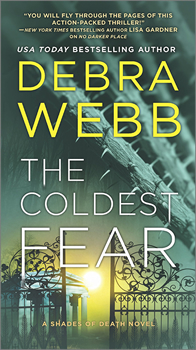 Author Debra Webb knows a little something about survival.

When her eldest daughter was born with life-threatening issues, Webb admits there were days when they weren’t sure she would survive. That dark period in her life helped Webb to understand the emotional landscape of her Shades of Death series protagonist, Bobbie Gentry.

“Detective Gentry suffered the kind of tragedy no one wants to think about, let alone survive,” Webb says. “A serial killer murdered her husband and caused the death of their child. I hope I never know exactly how that feels, but personal experience gave me a hard, up close look at that kind of pain.”

Crawling through the darkness hasn’t been easy, but Webb says she now has two beautiful granddaughters who bring immense light to her life. Bobbie, on the other hand, still has some climbing to do—and in THE COLDEST FEAR, the third installment in the series—she must confront the monster who caused the loss of her family.

Though, thankfully, not without assistance.

“Bobbie has walked through hell and come out of the darkness, but she didn’t make that journey alone,” says Webb. “She had serial hunter Nick Shade’s help.”

Readers were first introduced to Shade in the first book in the series, No Darker Place. A man with his own nightmares and demons. A man willing to put his life on the line for Gentry—as long as she’s able to put her trust in him. As one might expect, easier said than done.

“When Nick made the decision to step out of the protective shadows to help Bobbie, he painted a target on his forehead,” Webb says. “In A Deeper Grave, readers learn more about Nick and his deep, dark secrets. As we move into THE COLDEST FEAR, Bobbie and Nick must work together to survive.”

Webb doesn’t make it easy on them. As is hallmark for the USA Today bestselling author, THE COLDEST FEAR is a twisty tale, rife with heart-pounding suspense and yes, a little romance too. Though readers itching to see what happens between Nick and Bobbie next will have to wait for The Longest Silence, the fourth book in the series—and Webb’s first hardcover.

The significance is important for Webb, who after selling her first story in 1998, had yet to secure the coveted “hardcover status.” It’s the gold at the end of the rainbow, a reward for her persistence and dedication to the craft, despite her own challenges, including an injury that damaged the nerves in her right arm.

“It took three years to learn to write my name again,” she says. “Typing mostly one-handed was not easy—but I refused to give up.”

Indeed. Webb has penned more than 100 books, most of which fit neatly within her five separate series, and a handful of special releases. While both readers and the author enjoy revisiting these characters again and again, Webb admits there are unique challenges.

“A lot of backstory comes with recurring characters, and you need a ‘fresh’ and ‘interesting’ way to weave those details into upcoming stories,” she says.

For example, when readers first meet Detective Bobbie Gentry, she is singularly focused on her work. Her one goal is to kill the man who stole her life. She doesn’t care if she lives or dies, as long as he dies first. By the time readers get to THE COLDEST FEAR, Gentry has faced some of the darkness lurking inside her—but her story isn’t finished.

“She must find hope again,” Webb says. “It’s a hard journey, but one she makes during the course of these first three books.”

A journey that will continue in Book 4, The Longest Silence, which is slated for release March 2018. In between marketing THE COLDEST FEAR, Webb is also hard at work on her first big stand-alone thriller—watch for details early next year! 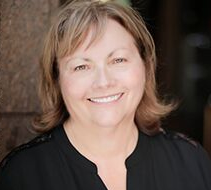 DEBRA WEBB is the award winning, USA Today bestselling author of more than 140 novels, including reader favorites the Faces of Evil, the Colby Agency, and the Shades of Death series. With more than four million books sold in numerous languages and countries, Debra’s love of storytelling goes back to her childhood on a farm in Alabama.