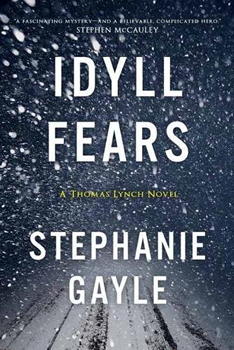 It’s two weeks before Christmas 1997, and Police Chief Thomas Lynch faces a crisis when Cody Forrand, a six-year-old with a life-threatening medical condition, goes missing during a blizzard. Lynch’s suspicions about who abducted Cody are met with scorn by his detectives, some of whom can’t handle the fact that he’s gay. With half the station out sick with the flu, Lynch seeks outside help: it arrives in the shape of an FBI agent for whom Lynch feels an immediate attraction.

To complicate matters, local crime is on the rise and Lynch finds himself the target of prank calls and hate speech that he worries is the work of a colleague. Time is ticking away, Lynch is struggling to discover who is behind Idyll’s crime spree, and he’s beginning to doubt that Cody will ever be found…

Author Stephanie Gayle sat down with The Big Thrill to discuss her latest novel, IDYLL FEARS:

A deep and unfailing love of my prose. Barring that, I hope they’re entertained. Some people talk of entertainment as if it’s bad or unworthy of your time. I love nothing better than losing myself in a story. If people are able to retreat into the world I’ve built, and forget their own for a few hours, I’ll be extremely pleased.

Is there any way to answer this question that doesn’t make me sound like an utter prat? No? Okay. I think IDYLL FEARS both buys into and subverts some of the big city detective turned small town cop stereotypes. It also adds to the library of LGTBQ mysteries, and it shows a progression in social attitudes that is focused on the main character, Thomas Lynch.

Of course! With every book I write I learn lots about subjects I never knew much about. For IDYLL FEARS, I learned about a rare genetic disorder, congenital insensitivity to pain with anhidrosis (CIPA). On paper, it sounds terrific; people with CIPA can’t feel pain. In truth, it’s terrible because it’s very dangerous for people to navigate a world without our biggest sensory warning system.

I’m also surprised by plot twists that don’t come out the way I’d planned originally. In this novel, Chief Lynch must discover who at his police station is playing pranks on him, and the answer came as a surprise to me.

There are dogs! The search and rescue dog is based on a wonderful service dog at work named Skylar. We’re very good friends. When her owner says my name she’ll run through the Lab’s offices to find me! Another thing you might not glean from the book jacket or PR materials is that the book has a lot of humor in it.

I think every book I’ve read has shaped me as a writer, especially those I dislike. Those books make me examine what I disliked, how the choices failed the story, or what I found problematic. It’s then easier to avoid those sins in my own writing. But if you want to know who some of my favorite mystery authors are, here is a very abbreviated list: Tana French, Jennifer Kincheloe, Raymond Chandler, K.C. Constantinople, Walter Mosley, Natsuo Kirino, and Josephine Tey.

Stephanie Gayle is the author of Idyll Threats, the first Thomas Lynch Novel, and My Summer of Southern Discomfort, which was chosen as one of Redbook’s Top Ten Summer Reads and was a Book Sense monthly pick. Gayle has also published stories and narrative nonfiction pieces, including two Pushcart Prize nominees.