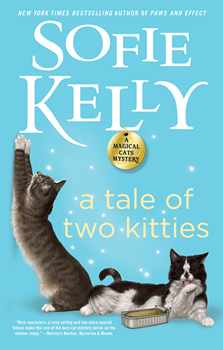 “I was a young adult author first, but I was a voracious reader of mysteries—everything from cozies to suspense,” she says.

Even while she was publishing books for teens, she was working on multiple mysteries, most notably the Second Chance Cat mystery series she writes as Sofie Ryan.

Sofie’s books add a new twist to the cat mystery. Her feline sleuths, Owen and Hercules, have a knack for solving crime that is literally magical. “The series brings together a lot of my favorite things,” she says. “I’m a cat person. I like small towns. I like the idea of a little magic in life—although I’d probably faint if I saw a cat walk through a wall.”

Since every cat lover knows cats are a little bit magical, Sofie didn’t have to look far for the supernatural abilities she attributes to her mischievous crime-solvers. “Every cat owner has a story about their cat ending up somewhere unexpected. It didn’t seem like that big a stretch to suggest maybe there’s something magical about the way a cat can seemingly disappear when you’ve only turned your head for a second.”

Her latest book, A TALE OF TWO KITTIES, begins with the possible reconciliation of the Janes twins, Victor and Leo. The brothers haven’t spoken since Victor ran off with Leo’s wife, who later died in a car accident, but now Victor is ill and seems anxious to mend fences.

I enjoyed the way the book balanced the serious questions of reconciliation and redemption with the lighter elements, such as protagonist Kathleen Paulson’s interactions with the cats.

Please help me welcome Sofie Kelly to The Big Thrill.

Congratulations on your new book, Sofie, and thank you for joining us today. Let’s start by talking a bit about cat mysteries in general. Why do you think cat detectives are so popular? What’s the secret of their lasting appeal?

How do you integrate the magical aspect of your books with their more realistic setting and worldview?

I start with the premise that the cat’s “skills” are the only magical element in the world of the book. Aside from those skills, Owen and Hercules act like regular cats, for the most part. I try to keep an element of uncertainty when it comes to their behavior. Maybe they are helping Kathleen catch a killer. Or maybe they’re just trying to wheedle another sardine cracker out of her.

You never know with cats! But speaking of Kathleen, can you tell us a little bit about her? I know she’s a librarian. I know she loves her cats. What else? What makes her an ideal mystery heroine?

Kathleen arrived in Mayville Heights from Boston to supervise the renovations to the library building. She fell in love with the town and decided to stay. I think she’s a good mystery heroine because she’s good at reading people. Kathleen’s parents are actors and she learned a lot about how people behave from watching them create characters. She’s good at spotting artifice. Because she’s a librarian she has excellent research skills and she knows all sorts of obscure facts.

What are some of the challenges involved in writing light mysteries?

It’s important to keep both language and violence in check when you’re writing a lighter mystery. Readers aren’t looking for graphic detail or a string of obscenities.

I try to keep things realistic—Kathleen recognizes that she’s seen more dead bodies than anyone she knows—while at the same time accepting this world isn’t the “real” world. In the real world who would be friends with Kathleen? People keep dying around her!

What drew you to this particular storyline?

One of my closest friends growing up had an identical twin sister. Every though they looked the same they were so different in personality—everything from their friends to their favorite foods. I noticed that people expected the two of them to basically be the same person just because they looked identical. My friend talked a lot about her frustrations with how people would assume they knew her well just because they knew her sister.

What would you say is a major theme of the book? What do you hope readers will take away from it?

I think one of the major themes of the book is the importance of family—the family we’re born into and the ones we create. I think what Robert Frost said about home in “The Death of the Hired Man: “Home is the place where, when you have to go there, / They have to take you in,” applies just as well to family.

Absolutely. And I think that quote underscores Victor’s arrival in Mayville Heights and why, after all this time, he still hopes his brother will talk to him. It sounds like you put a lot of thought into your books. What’s your writing process?

I’m a die-hard outliner. I don’t have to know every detail but I need to know the big ones. I’m in awe of writers who can start a book without knowing who the killer is. (It probably won’t surprise anyone to learn when I travel I like an old-fashioned map for navigating.)

How about research? What’s the most unusual thing you’ve ever done when researching a book?

I had someone duct tape me to a chair so I could see how hard it was to tip the chair over in that circumstance. (A lot harder than I expected!) And I’ve had some very odd conversations about rope and chains in my local building supply store.

Now you’ve made me want to try it! While I hunt for the duct tape, Readers, you can learn more about Sofie and her writing at www.sofiekelly.com or www.sofieryan.com. 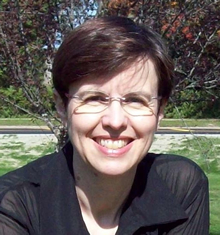