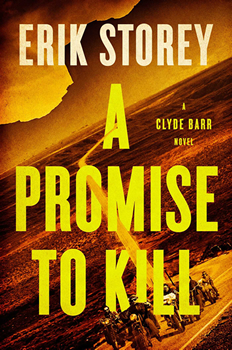 Clyde Barr, the drifter with lethal skills, is alone again, wandering the highways of the American West in search of something to believe in. As summer turns to autumn, he trades his car for a horse and heads for the mountains, planning to clear his head and regain his edge with some hunting. But when he runs across an elderly, sick man—a Ute Indian from a nearby reservation—Clyde’s dream of solitude is quickly dashed.

On the reservation, Clyde finds the old man’s daughter, Lawana, and grandson, Taylor, as well as a group of menacing bikers called Reapers running wild in the economically depressed, half-abandoned village. Gripped by the desire to do good in a hard world, Clyde offers to stay on Lawana’s ranch to help out until her father is released from the hospital. He controls himself around the bikers, even when he sees them harass a few Native American women—but when the Reapers attack a local boy Clyde has to do something. As tensions rise between the locals and the Reapers, Clyde’s efforts to protect the reservation become a fight for his, Lawana’s, and Taylor’s lives. And then the stakes ratchet up even more.

In the remote Utah desert, surrounded by enemies, with no law enforcement presence, and with communication effectively cut off, Clyde must find a way to save his new friends, defeat the gang, and, hopefully, escape with his own skin intact. A PROMISE TO KILL  is an edge-of-the-seat thriller, pushing its no-holds-barred hero to new levels of improvisation and bare-knuckled blunt force.

Erik Storey recently sat down with The Big Thrill to discuss his latest novel, A PROMISE TO KILL:

I hope readers take away paper cuts after reading this book. Jokes aside, I hope that people who read it will get a slight introduction to the folks who live on a reservation, and cheer for them as they take on yet another enemy. I hope they see the resilience and toughness that I saw when I visited.

I think there are very few thrillers set in Utah and Colorado, and with both this and my previous Clyde Barr book I tried to rectify that. Through these books, I hope that readers can get a sense of the space and beauty of the West, along with the dirty underside that is rarely talked about in a place romanticized for so long.

H. Rider Haggard was a huge influence when I was younger. In fact, my main character Clyde Barr was inspired by Alan Quartermaine. During my wandering years, I read every Louis L’Amour book while resting in bunkhouses, logging camps, and remote cabins. This inspired me to write contemporary westerns, or more accurately, modern thrillers set in the American West. 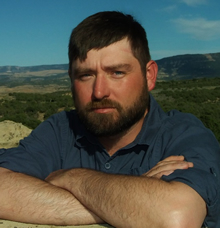 Erik Storey is a former ranch hand, wilderness guide, dogsled musher, and hunter. He spent his childhood summers growing up on his great-grandfather’s homestead or in a remote cabin in Colorado’s Flat Tops wilderness. He has earned a number of sharpshooter and marksman qualifications. He is the author of two Clyde Barr novels, Nothing Short of Dying and The Uprising. He and his family live in Grand Junction, Colorado.