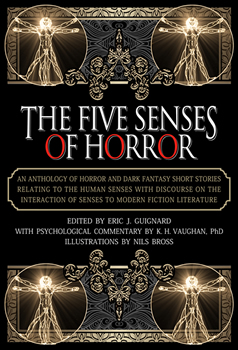 Hearing, sight, touch, smell, and taste: Our impressions of the world are formed by our five senses, and so too are our fears, our imaginations, and our captivation in reading fiction stories that embrace these senses.

Enclosed within this anthology are fifteen horror and dark fantasy tales that will quicken the beat of fear, sweeten the flavor of wonder, sharpen the spike of thrills, and otherwise brighten the marvel of storytelling that is found resonant.

Editor Eric J. Guignard and psychologist K. H. Vaughan, PhD, also include companion discourse throughout, offering academic and literary insight as well as psychological commentary examining the physiology of our senses, why each of our senses are engaged by dark fiction stories, and how it all inspires writers to continually churn out ideas in uncommon and invigorating ways.

Featuring stunning interior illustrations by Nils Bross, and including fiction short stories by authors such as Ramsey Campbell, Richard Christian Matheson, and John Farris, THE FIVE SENSES OF HORROR is intended for readers, writers, and students alike.

The Big Thrill had the opportunity to discuss THE FIVE SENSES OF HORROR with the anthology’s editor, Eric J. Guignard:

This book is a study that combines both a focus on scientific research and the short form of horror and dark fantasy within the last seventy-five years, exploring the physiology of our five senses, why each of our senses are engaged by dark fiction stories, and how it can inspire and strengthen writers.

Yes, I discovered an extravagance of fascinating information. Some items include:

Smell is the most acute of our senses, and also most closely linked to triggering vivid memories and awakened emotions; it has the strongest psychological effect of all our senses. For the sense of hearing, our brain craves to make sense of patterns in sounds that have mathematical regularity, while sounds without patterns are those that cause us alarm. Through rhythmic sounds, we can find hypnosis or other mind-altering states; without rhythms, our brains can be led to fury, panic, or insanity, For the sense of taste, each person’s sense of flavor is as unique as their fingerprint, shaped by both genes, life choices, and external factors, and it’s continually changing with each new meal. 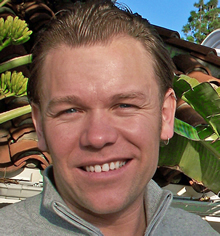 Eric J. Guignard is a writer and editor of dark and speculative fiction, operating from the shadowy outskirts of Los Angeles. He’s won the Bram Stoker Award, been a finalist for the International Thriller Writers Award, and a multi-nominee of the Pushcart Prize.

His stories and non-fiction have appeared in publications such as Nightmare Magazine, Black Static, Shock Totem, Buzzy Magazine, and Dark Discoveries Magazine. As editor, Eric’s published the anthologies DARK TALES OF LOST CIVILIZATIONS, AFTER DEATH…, +HORROR LIBRARY+ VOLUME 6, and is soon to release A WORLD OF HORROR, the first volume in an annual series of anthologies showcasing international horror short fiction.

Read his novella BAGGAGE OF ETERNAL NIGHT (JournalStone) and watch for forthcoming books, including the novel CROSSBUCK ’BO.