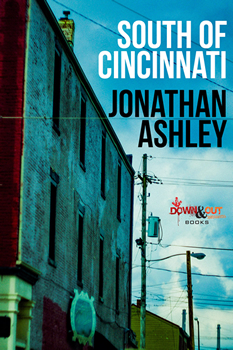 Jon Catlett and Paul Frank have turned their once-failing used bookstore into one of the most thriving businesses in the Highlands. But they paid in blood for their success, for Second Story Books is not just another dusty thrift shop, but a front for the largest heroin distribution network ever based in Louisville.

The two eccentric intellectuals-turned-gun thugs enlist the help of an unscrupulous narcotics cop nicknamed Mad Dog, and a former marine importing dope through Fort Knox from Afghanistan that is purer than anything the city has ever seen. Inbetween trading muzzle flashes with a corrupt and psychotic DEA agent and thwarting two crusading homicide detectives, Catlett and Frank plan to corner the market…or at least everything South of Cincinnati.

The Big Thrill recently caught up with Jonathan Ashley to discuss his latest thriller, SOUTH OF CINCINNATI:

I hope that readers, if I do my job right, develop a more empathetic worldview, especially toward those who exist on the fringes of society, those hopelessly stuck in the felon class striving desperately to escape a life of crime and achieve some semblance of grace and meaning.

If I even come close to realizing my original ambition, in the tradition of Pelecanos and Price and, before them, Nelson Algren, I wanted to link crime and sociology. I was especially interested in the dynamic that we, as a society, conveniently accept or ignore, that is, those of us that it does not effect, the tragic truth that we are “served” by an inherently biased judicial system in which the rich can buy themselves out of almost any criminal charge while the poor can only pray that their public defender doesn’t altogether suck. I wanted to demonstrate that the two forces that might change the world for the better and lessen the detrimental, ripple effect of the “war on drugs” a corrupt system and cold, calloused voter base of the rich and elderly only worsen lives already threatened or destroyed by the heroin epidemic. Once this manuscript hits stores and the net, I do not imagine I’ll be very popular among Louisville law enforcement and judges and district attorneys. That’s okay. They weren’t members of my fan club to begin with.

I discovered my own capacity for love and forgiveness in the writing of this novel. Each character is based on someone I know, and some of these people are estranged, some I still resent from my time on the street surviving addiction and a life of crime. Through seeing them from a more objective limelight, I was able to remind myself that I was just as sick as a lot of my friends who are still struggling, and I now pray for those still suffering, on the street or on their way to some sort of redemption and recovery. Like one of my favorite writers, Don Carpenter, ends his most hilarious novel, “This is love. To hell with the rest.”

I can tell you that things do not end well and expect to be left dumbfounded, maybe a little brokenhearted, and, again, I can only hope, a grand finale of this trilogy that has taken turns I didn’t even expect. I am not an optimist by nature. But this book, while at times dangerously tender, is by far the darkest project I’ve ever worked on and, conversely, the most honest. Also, the femme fatale in the book, this one far more of a challenge and, in the end, maybe even a friend to our anti-hero, is based in character on a woman I love dearly. They even fight like we do and display their affection through words of character assassination and adversary. I try to establish an almost immediate connection between the two without being cliched or obvious. The real version of Snyder tells me I’d be better at writing sex or romance novels, so perhaps I showed some of that in such scenes, whether it works or not.

Mark Smith’s The Death of the Detective is one of the finest novel’s I’ve ever read. It works as literature, It works as pulp. It works as a mystery, a whodunnit, a serial killer thriller, and, most importantly, a study of capitalist society and moral duplicity among the powerful. His work precedes Cormac McCarthy’s best, but is every bit as lyrical and moving. In fact, an apt description of his National Book Award nominated masterpiece would be if McCarthy had been asked to write for “The Wire.” His are the sentences and chapters by which I’ll always gauge my own worthiness as a writer. 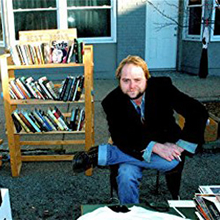 Jonathan Ashley is the author of Out of Mercy and The Cost of Doing Business. His work has appeared in Crime Factory, Out of the Gutter, A Twist of Noir, LEO Weekly, Kentucky Magazine, and Yellow Mama. He lives in Lexington, KY.