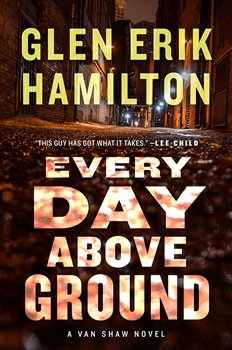 When an old acquaintance of Van Shaw’s late grandfather—a terminally ill ex-con—shows up in Seattle, he offers the broke veteran a money-making opportunity that sounds like a thief’s dream: an easy fortune in gold, abandoned and nearly forgotten after its original owner died. The grandson of a career thief who taught him all the tricks of his trade, Van knows that nothing is ever quite as easy as it seems. The safe holding the fortune turns out to be a trap—deadly bait set by a malevolent player armed with tremendous resources, an army of hunters, and a lifetime of hatred. For Van, every day above ground is a good day, and all the better if he can stay on the right side of the law, even though crime is his gift . . . and in his blood.

Glen Erik Hamilton discussed his latest thriller, EVERY DAY ABOVE GROUND, with The Big Thrill:

First and foremost, I aim to take readers on an exciting ride—if they are intrigued by the characters and can’t wait to find out what happens next, then I’ve done my job. And for fans who have been with Van Shaw and his friends since the start, they will get to see their favorites grow and change. I’m not interested in stasis. Most readers aren’t either. It’s much more intriguing when each entry in the series moves forward, just like real life.

I always find it tough to pick one category for the Shaw books. Are they crime thrillers? Mystery adventures? I like whodunits. I like big action scenes. And I like psychological suspense. There’s no reason that we can’t enjoy all of those, as writer and reader, with characters we care about getting mired in trouble. So if I’m bringing anything new to the party, it would be helping to break out of those arbitrary pigeonholes and let the novel be its own eclectic thing.

As you might guess from the title of the first book, Past Crimes, the Van Shaw series deals a lot with how history—both personal and familial—influences the present. The past can bring us trouble, or give us strength. Van is a crossroads at the start of EVERY DAY ABOVE GROUND. He’s trying to rebuild his childhood home, but is that house a place for the ex-criminal and ex-soldier to make a fresh start, or a symbol of burdens he needs to overcome? By the end of the story, he’ll have a new lease on life. Whether that direction is really the best thing for him, that’s another question. 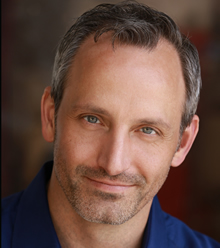 Glen Erik Hamilton’s debut Past Crimes won the Anthony, Macavity, and Strand Magazine Critics awards for Best First Novel, and was also nominated for the Edgar, Barry, and Nero awards. Publishers Weekly and Library Journal gave Past Crimes starred reviews, and Kirkus called the book “an exciting heir to the classic detective novel.” The follow-up in the Van Shaw series, Hard Cold Winter, was published to rave reviews in March by William Morrow (US) and Faber & Faber (UK). A native of Seattle, Glen grew up aboard a sailboat, finding trouble around the islands and commercial docks of the Pacific Northwest. He now lives in California but frequently returns to his hometown to soak up the rain.