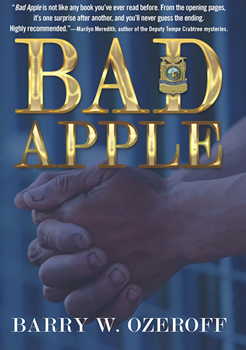 In his new release, BAD APPLE, author Barry Ozeroff skillfully combines action, suspense, and complex characters to create a tightly-written, fast-paced police thriller—with a thought-provoking twist. The talented author of four published novels, Ozeroff recently sat down with The Big Thrill to discuss his latest release, his own exciting career in law enforcement, and his advice for aspiring crime authors.

Congratulations on the recent release of BAD APPLE. No spoilers, but what can you tell us about your book that we won’t find in the jacket copy or the PR material?

There are really two stories being told in BAD APPLE: the current story of DJ Appleby’s fall from grace and flight from justice, and the heartbreaking backstory of his childhood, which explains exactly why he is the way he is. I intentionally blurred the lines between good guy and bad guy in order to create either a bad guy you hate to love, or a good guy you love to hate, depending on your point of view.

In addition to getting a real sense of satisfaction with how DJ plays the cards he’s been dealt, I want readers to see past the badge and the bars, and really look at the people behind them. Beyond that, BAD APPLE provides an insider’s view of how a police department polices itself, and offers a rare look at life on the run and in custody.

BAD APPLE is the perfect mix of good cop/bad cop, and imprisoned ex-cop-turned-badass (but still human). It’s non-formulaic and something new in the thriller genre.

Your protagonist is a Portland police officer. Like DJ, you spent 28 years as a police officer, and were a school resource officer, a traffic motorcycle officer, a S.W.A.T. sniper, and a hostage negotiator—quite an exciting career. How has your police experience informed your writing? Are there certain themes to which you are continually drawn?

The adage “write what you know” applies to me. Many of my police experiences have found their way into my books, which greatly ups the realism. I couldn’t write a convincing medical thriller from a doctor’s point of view, but I can write about police, S.W.A.T., and hostage negotiations all day long. I’m a natural “plotist,” and “copping” has provided a wealth of stuff to write about.

Police work is pretty black and white, and as for recurring themes, my books are usually good guys versus bad guys. My bad guys tend to be pretty bad, and my good guys are ordinary men forced to do extraordinary things.

Street-level policing can be ugly and gritty, and that grimy realism translates naturally into my books. They are full of little nuances and insider info that only a cop would know, which helps make them unique and authentic.

In BAD APPLE, DJ finds himself in the last place a cop wants to be—behind bars alongside criminals he may have helped to put away. In fact, the book deals with a tough topic: officers acting outside the law. What special research, if any, did you do for BAD APPLE?

In the police academy, I was friends with a recruit who, after four years of working the streets, was arrested for a violent series of rapes and robberies which included an attempted murder. His case sparked in me an intense interest in cops gone bad (though he was more of a bad guy gone cop.) Since then, I’ve read up on every “bad apple” case I could find. The few I’ve known personally were, for the most part, good people (and good cops) who allowed their flaws to get the better of them.

I tried to interview incarcerated former officers, but didn’t find any willing to talk. I’ve toured prisons and interviewed correctional officers, and of course done the requisite Internet research. I’ve also visited all the locations in the book to get the authentic flavor of my settings.

Was there anything new you discovered that surprised you as you wrote this book?

I discovered that as much as I don’t want it to be true, there are certain situations in which taking matters into one’s own hands can be far more effective—and more satisfying—than leaving them in the hands of proper authorities; not an easy thing for a police officer to say!

As an officer, you’ve received a number of commendations, including a Medal for Valor. When did you decide to start writing police thrillers? Can you tell us a little about your journey to publication?

I’ve wanted to tell stories since high school, but never really thought of a way to do it. When I made my first attempt at writing a novel, which was a sci-fi time-travel/coming-of-age/urban fantasy hybrid, I was already a cop and a S.W.A.T. sniper. I soon realized I have a cool job and could easily write about it. Then, while on a S.W.A.T. callout, a great plot idea came to me and my first novel was born. I’ve been writing ever since.

What authors or books have influenced your writing, and why?

Nelson DeMille and his character John Cory. I love that guy. The late great Gary Jennings and his epics Aztec, The Journeyer, and Raptor. In reading and rereading them, I’ve learned a lot about character development, plot structure, pacing, and dialogue.

Reviewers have called your novels “fast-paced,” “riveting,” and “[c]harged with adrenaline.” What advice can you give aspiring authors when it comes to building and maintaining a pulse-revving pace?

Keep the narrative tight. Make the conflict compelling, with a lot at stake. I like writing first-person present tense to achieve a real sense of urgency, though for BAD APPLE I decided on past-tense because of the occasional switching between current action and recollections of DJ’s backstory. Find the balance between fast pace and smooth narrative. Don’t have too many plot twists, but when you do them, do them big, with a powerful “daayumm” factor.

Once I have the basic plot mapped out, I write fast and furiously, especially when I am moving toward a particular plot point. I move between plot points like stepping on stones to cross a stream, filling in the rest along the way. I fly though action scenes as fast as I can type. I like to write late at night and early in the morning. Admittedly, I’m not much company to those around me when I’m in the zone. On my days off, I can knock out six thousand words like it was nothing, most of which is good first draft stuff that ends up in the finished product. I really bog down in transitional scenes though, sometimes percolating through them for days.

My favorite place to write is my living room easy chair. Cabins in the woods make me want to hike, not write.

What can readers look forward to next, Barry?

The sequel to BAD APPLE! Relative Justice picks up exactly where BAD APPLE lets off. Around the midpoint, the pace switches gears from fast to frenetic. The title is apropos, and carries a double meaning—the relative nature of street justice, and how DJ’s relatives choose to deal with some intense situations. Advance readers say Relative Justice is one of those rare cases where the sequel outdoes the original. 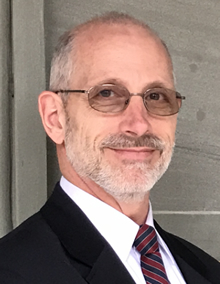 Barry W. Ozeroff retired in 2014 after a 28-year career as a police officer, both in La Mesa, CA and Gresham, OR. During his police career, Barry spent 4 years as a school resource officer, 6 years as a traffic motorcycle officer and member of the Vehicular Crimes Team, 5 years as a SWAT sniper, and 12 years as a hostage negotiator. Barry, who was also a field training officer and public information officer, is the recipient of numerous citizen and supervisor commendations, the Oregon Peace Officer’s Lifesaving Award, and the Gresham Police Department Medal of Valor.

Bad Apple is Barry’s 4th novel, following Sniper Shot, Return Fire, and The Dying of Mortimer Post. The sequel to Bad Apple, Relative Justice, is under contract and will be released sometime in 2018. Barry has 5 children and 4 grandchildren, and lives with his wife in the Pacific Northwest.

To learn more about Barry, please visit him on Facebook.