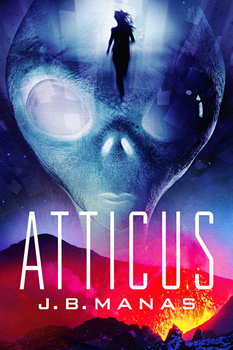 WITHIN ONE MAN’S PAST LIES THE WHOLE WORLD’S FUTURE

Suspended for negotiating with an armed lunatic, rookie cop Marti Coldwater is feeling lost and unappreciated. But her day is about to get a whole lot worse when her car is run off the road by a strange, falling military craft and she rescues the lone passenger—a young British amnesiac who thinks it’s 1944.

Soon, she and her newfound companion are relentlessly pursued by murderous men in suits and a sinister Nordic assassin with a singular mission—capture the stranger and kill anyone who’s seen him.

When she uncovers a plot threatening the entire planet, Marti is thrown into a world of highly classified government programs and astonishing alien secrets. Now, her only hope of saving the world is to try to recover the memories of a man who may be the most dangerous of all—the man who calls himself Atticus.

Author J. B. Manus spent some time with The Big Thrill discussing his latest novel, ATTICUS:

Above all, I hope readers feel like they’ve been on a fun thrill ride, with lots of twists and turns and entertaining characters. But also, as the book borrows thematically from To Kill a Mockingbird (hence the name Atticus), I hope it gets them thinking about how we can’t judge a book by its cover (metaphorically at least), and that we need to dig deeper to reconcile our differences.

My books always involve quite a bit of research into little known historic or scientific facts. Without giving too much away, I was surprised at the number of real military projects that were simply decoys for other, “above top secret” initiatives. In fact, there were a few top secret military projects that were themselves decoys for even more secretive projects! I also learned about some interesting Norse fables that ended up playing a role in how the story played out.

My original inspiration for the book was from one of my favorite movies, the original The Day the Earth Stood Still. While this is a different story completely, I was enamored with the idea of a mysterious stranger in town, a potentially dangerous one and nobody knows who he is or where he’s from. In this case, he has amnesia, so even he doesn’t know who he is, but all evidence seems to point to him being from the 1940s.

My earliest books (that I remember) were the Ian Fleming James Bond books and the Sherlock Holmes canon. I think the Fleming books probably influenced my writing style, which Kirkus Reviews noted was unfussy and straightforward. And the Holmes books certainly influenced my love for planting little mysteries. Perhaps my biggest literary influence was Michael Crichton. I loved that his books read like movies, and I aim for the same effect. From a pure storytelling and pacing standpoint, my biggest influences were Hitchcock and Spielberg. Astute readers will probably see references here and there. 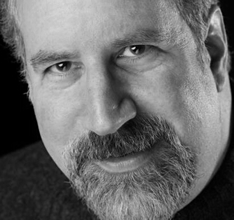 J. B. Manas is a Philadelphia-based author of fiction and nonfiction. He is the author of the new sci-fi thriller, ATTICUS, and co-author of The Kronos Interference, named to the “Best of 2012” by Kirkus Reviews, which gave the book a starred review, calling it “impressively original” and “[a] tour de force.”

His nonfiction books (written as Jerry Manas) on leadership lessons from history, science, and the arts have been translated into eight languages and course-adopted in universities worldwide.

Manas is an avid movie buff, pop culture maven, popular comic con speaker, art lover, world traveler, songwriter and guitarist, technology geek, wine connoisseur, and an armchair philosopher–all of which make their way into his writing at one time or another.

In the fiction arena, he enjoys writing fast-paced, sci-fi adventure thrillers infused with historical secrets, scientific discoveries, and exotic locales. A longtime fan of both Hitchcock and Spielberg, he has an affinity for balancing his stories with suspense, humor, and a touch of mystery.

Manas writes out of his home in suburban Philadelphia, where he lives with his wife, daughter, and dog Kayla, an American Dingo rescued from the swamps of South Carolina.