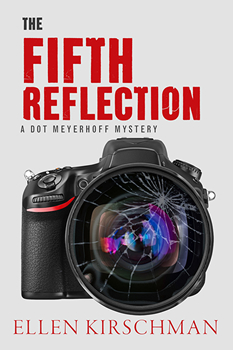 THE FIFTH REFLECTION, the new novel by Ellen Kirschman, is the third book in the popular Dot Meyerhoff series featuring police psychologist Dr. Dot Meyerhoff. As a police and public safety psychologist, Kirschman knows her subject.  She brings a fresh voice and a chilling sense of realism to her thrillers.  Recently, The Big Thrill had the chance to catch up with Kirschman.

Congratulations on your upcoming release. Without giving any spoilers, what can you tell us about your book that we won’t find in the jacket copy or the publisher’s material?

My mysteries are inspired by real officers and real events. What remains hidden are any identifying details. I owe a great deal to my clients. It frustrates me not to be able to thank them publicly.

I write this series in the hope that readers will learn about police work and never again look at a cop the same way. THE FIFTH REFLECTION looks at the difficulties of marriage to a cop, the strain that investigating Internet crimes against children puts on the investigator as well as the psychologist who is trying to help him, the delicacy of human feelings, the deadliness of jealousy, and the musculature of lying.

Your first-hand knowledge of the field gives your fictional world authenticity, and provides readers with insight into what it’s like to be a cop. What have been the challenges of writing about a calling you know so well? And the advantages?

The world of law enforcement is a world of stories. Stories are how training and tradition are passed from one officer to another, from veterans to rookies. What a goldmine for a writer. I’ve been on hundreds of ride-alongs, been involved with close to a dozen officer-involved shootings, and counseled cops and their families for more than thirty years in twenty-two states and four countries. Not to mention responding to a constant flow of emails with “Help” in the subject line. That’s a lot of stories.

The biggest challenge is to write about psychology and law enforcement accurately, and in such a way that my readers keep turning the pages. The reality is that both counseling and police work involve long stretches of boring, quiet, detailed endeavor.  The advantage is that Dot gets to do things I would never dream of doing as a real psychologist: undercover work, breaking and entering, and assault with a deadly weapon. Not to mention that fictionalizing the real world gives me license for payback. I get to take pot shots at any number of people—psychologists, cops, even a few ex-husbands.

You have called Dr. Meyerhoff funny and headstrong. Others have called her smart, gutsy, and determined. What elements of Dr. Meyerhoff’s past have shaped the woman she is today? How has her character evolved as the series has progressed?

The more I write, the more complex my characters become. It’s as though they are revealing more of themselves to me with each book. Dot’s father, a 1960s student radical, was beaten by the police and left with a lifelong injury.  Her mother is a flower child who loves everyone and everything and has spiritual beliefs ranging from pilates to macrobiotic cooking. Even Dot, in THE FIFTH REFLECTION, recognizes how they have influenced her life. “With righteous indignation for the underdog combined with the ability to normalize bizarre behavior as my parental legacy, how could I have not become a psychologist?”

Many things about Dot remain the same in book three as in book one. She is still spunky, fearless, and too dedicated to the job for her own good. But, cognizant of her age, she takes fewer physical risks, relying more and more on her psychological acumen. She’s also beginning to realize the unprocessed depth of pain that she experienced when her husband left her and how it’s impeding her ability to fully commit to a new relationship.

This time Dr. Meyerhoff finds herself dealing with the very real and very disturbing world of Internet child pornography. What inspired you to tackle such a difficult topic?

Sometimes I worry that potential readers will be put off because the subject is so repugnant. Fortunately, the book is not so much about child pornography as it is about the psychological strain of investigating Internet crimes against children, the complexities of being married to a cop, and the deadliness of jealousy.

I remember the moment I decided to write about how such investigations effected cops. I was at a retreat for the spouses and significant others of law enforcement officers watching a young mother weep as she told us how the job of investigating Internet child pornography was changing her husband and ruining their relationship. She was so sad and helpless I began to research what might be done to minimize the stress of the job and stop it from spilling over to the family. I found some material about helping the officer, but virtually nothing about helping the family.

The easy answer is that I’m consistently drawn to writing about the world of law enforcement and first responders. I want to show what I know to be real, not the one-dimensional, made-for-TV variety.

You write both fiction and nonfiction. What first drew you to the genre of thriller/mystery writing? Can you tell us about your journey to publication?

I got fed up with reality and mistakenly thought it would be easier to make things up. I was wrong. Maybe even delusional. The challenge of writing nonfiction is to do the research, get the facts right, and present them in an engaging format that the reader can pick up and put down at will.  Fiction, on the other hand, requires the writer to get the reader to care so much about the story and the characters that she’ll bare her teeth at anyone or anything that interrupts her before she finishes the book.

I readily found a publisher for my nonfiction by writing a polished, professional book proposal. I’ve been with Guilford Press now for two decades and three books (plus a revision and a second edition). My path to publishing fiction was full of potholes. Lots of rejections and a few offers so bad I turned them down. The first publisher I signed with went out of business with hardly any notice. I kept writing while my agent kept “agenting” until Oceanview not only picked up my second Dot Meyerhoff mystery, The Right Wrong Thing, it adopted the orphaned Burying Ben and bought my forthcoming THE FIFTH REFLECTION.

Moral to the story? Read widely. Use a professional editor. Be open to feedback, but only from people you trust and admire. Never give up.

I write from an office at home. It’s not my favorite spot, but it’s the only one I have.  The best thing about it is the door.  It shuts and it locks. My husband is a photographer and he works at home too. Whenever I leave my office to go to the bathroom or get a cup of tea, he wants to talk. Imagine that! Poor guy does most of the cooking and food shopping. He deserves a wife who actually listens. Not one who only looks like she is because, even though she’s left her office, she’s still writing, plotting, and—this really happens—talking to her characters. This is especially egregious because I have plagiarized my husband’s entire life to create the character of Frank.

I keep saying I’m done with nonfiction and then my publisher asks me to write something else. At the same time, Dot Meyerhoff keeps tapping me on the shoulder. She has things to do, people to straighten out, especially her chief. And then there’s getting married. She won’t be able to postpone it much longer or her fiancé, Frank, will take a hike and her mother will never talk to her again. And what about getting into therapy? Just like the cops she counsels, she’s better at solving other people’s problems than she is at solving her own. 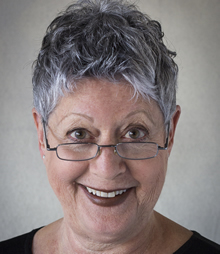 Ellen Kirschman, PhD. is an award winning public safety psychologist and author of I Love a Cop: What Police Families Need to Know, I Love a Firefighter: What the Family Needs to Know, lead author of Counseling Cops: What Clinicians Need to Know and three mysteries, Burying Ben, The Right Wrong Thing and the forthcoming The Fifth Reflection, (July 2017) all told from the perspective of police psychologist Dr. Dot Meyerhoff. She is a member of Sisters-in-Crime and Mystery Writers of America. She blogs with Psychology Today and The Lady Killers.