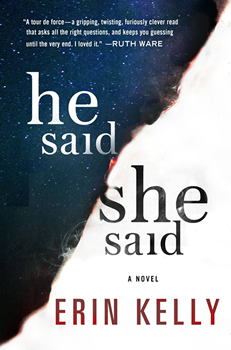 Just like the two sides of a coin, each person in a dispute can only tell his or her side of the story—their truth as they perceive it, or as they want to project it. Nobody puts this theory to the test better than Erin Kelly in her new novel HE SAID / SHE SAID, in which her main character Laura accidentally interrupts an encounter between a man and a woman during the total eclipse of the sun.

Laura knows that she saw something terrible. The man denies it. It is her word against his, while the victim seems grateful. Months later, the woman turns up on Laura and her husband Kit’s doorstep like a lonely stray. But as her gratitude takes a twisted turn, Laura begins to wonder? Did she trust the wrong person? The Big Thrill had the opportunity to chat with Erin Kelly about her latest book.

What can you tell us about developing Laura and Kit as characters?

I was so lucky with this couple; they came to me, if not fully formed, then pretty whole. They are my peers, so I had all the references I needed at my fingertips, but it went deeper than that. Sometimes I know what my characters did, but not why they did it. Sometimes, I know who my characters are and what they’re capable of, but not what my story needs them to do. This time, I knew both those things. The fun was in working out the details: what was Kit’s planned career that was so derailed by the events of 1999? What is it about Laura that makes her so determined to stick to her principles even when that means breaking a different moral code? By looking into their childhoods and their family dynamics, I was able to put flesh on their bones.

When we first meet Kit and Laura, they are afraid of Beth Taylor’s machinations. The character is named after the actress Elizabeth Taylor. Was this intentional?

Yes. I wanted her to be untraceable. Laura never knows where Beth is, or even whether she’s alive. In today’s world it’s easier to hide in plain sight than it is to go off-grid.

Eclipses play an important role in this story, is this something you always liked from before?

It’s a great regret that I’ve never witnessed a total solar eclipse. A couple of partial eclipses have occurred over London in my lifetime, but they were both clouded out and even then they don’t compare to the total experience. But a few years before the book, I’d read a blog about eclipse chasers—people who structure their whole lives around travelling the globe to witness the phenomenon. I’m always interested in the things people are passionate about. As well as being an interesting lifestyle, and one I’ve never seen set down in fiction, it blew the story wide open for me. I’ve written several psychological thrillers where the threat was pretty much confined to the home. This let me take the action global. There’s a scene on nearly every part of the planet. Plus, I love good, evocative nature and science writing, and welcomed the chance to introduce elements of that into my book.

What was the most difficult part of the research for this novel?

The legal stuff. The mid-section of the book is a courtroom drama—the rape trial where Laura, so sure the accused man is guilty, tells what she thinks is a “little white lie” that goes on to destroy everyone’s lives. I grew up on David E Kelley dramas, which are skewed not towards the witnesses’ experience in the stand but on the lawyers’ personalities. British courts are even more subdued: there’s showmanship on the part of the barristers but it’s understated. My first draft had a lot of lawyers speechifying but played down Laura’s testimony. I shared it with Neil White, a fellow British crime novelist who’s also a Crime Prosecution Service lawyer. His feedback was invaluable. He pointed out that actually, the barristers say as little as possible. They ask the right questions but otherwise stay quiet and let whoever’s on the stand incriminate, or exonerate,  themselves. He said, do it my way and it’ll have much more heart, and much more suspense, and he was absolutely right. Basically, the barristers give the witness enough rope to hang themselves—and that’s exactly what Laura does.

You intertwine a few timelines, from 1999 to 2015. What difficulties or advantages you can discuss about the use of non-linear story telling?

Multi-stranded books suit the kind of story I like to tell, which usually has some element of a buried past coming back to haunt the present. I wrote one linear novel—The Ties That Bind—and I’m glad I tried writing that way, but it felt thin and restrictive to me, like I couldn’t do everything I wanted. I think it suits a more straightforward procedural but doesn’t necessarily work for me. I’m in awe of authors who can make it work. With HE SAID / SHE SAID, the then-and-now was less important than the subtle differences in Kit and Laura’s perceptions of the same events. For every chapter I had a set of accompanying notes that said something like—What does Kit know at this point? What does Laura know? What are they both still hiding?

What kind of promotion are you planning for HE SAID / SHE SAID?

I’m just winding down a UK tour of bookshops and festivals. This book took a long time to write, and was finished in 2015, so it’s been wonderful to connect with readers at last. Most of my US promotion will be online—I’m already having interesting conversations on Twitter and Instagram. My publishers at Minotaur have some fun things planned. As many of you will already know, there’s a huge total eclipse in the States in July, and they’ve organized a Facebook “festival” to coincide with that.

A minor character from my first novel, The Poison Tree, makes a surprise reappearance in this book! I challenge eagle-eyed readers to spot the place.

My new novel is about a woman whose husband buys her a luxury apartment in a former Victorian mental hospital in the English countryside. She can’t tell him that she has history with the building… a history that’s threatening to come back to haunt her. It’s set in the present day, then jumps back to 1998, and concludes in 1958.

Erin Kelly is a Sunday Times top-ten bestseller, and her work has been optioned for TV by Amblin Entertainment. She was born in London, England and has written six acclaimed novels. Her debut psychological thriller The Poison Tree was a Richard and Judy Bestseller and an ITV drama. In 2014 she was chosen to write Broadchurch: The Novel, inspired by the BAFTA-winning series. She teaches creative writing at Curtis Brown Creative in London, for Guardian Masterclasses; has lectured at City, Warwick and London Metropolitan Universities; and is part of the Killer Women female crime-writing collective.

To learn more about Erin, please visit her website.