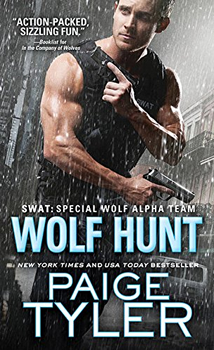 A STORM IS BREWING…

Remy Boudreaux is back in his hometown, New Orleans. He’s there with three of his fellow Dallas SWAT officers for a week of training with the NOLA PD. On the eve of a tropical storm, Remy and his buddies prowl the French Quarter. One tantalizing scent captures Remy’s senses, forcing him to follow until he is face to face with Triana Bellamy—his beautiful high school crush.

After reconnecting, Remy and Triana are close—very. Remy struggles to keep things casual. Ever since his partner—and first love—was killed on the job, he’s kept women at a distance.

But when a mysterious wolf pendant ropes them both into danger, Remy’s protective instincts kick in. He may have to reveal his true self…and hope Triana accepts him.

After reading Remy and Triana’s very emotional story, I’d like them to fall in love even more with the SWAT pack and be eager for the next book in the Special Wolf Alpha Team (SWAT) series!

It’s filled with danger and excitement, and will have readers staying up late into the night to see what happens!

The hero was first introduced in Book One of the SWAT (Special Wolf Alpha Team) Series (in Hungry Like the Wolf), but I had no idea he had such a painful past.

Paige Tyler is a New York Times and USA Today Bestselling Author of sexy, romantic suspense and paranormal romance. She and her very own military hero (also known as her husband) live on the beautiful Florida coast with their adorable fur baby (also known as their dog). Paige graduated with a degree in education, but decided to pursue her passion and write books about hunky alpha males and the kick-butt heroines who fall in love with them.