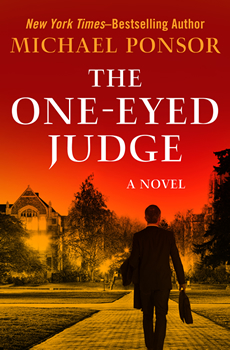 When FBI agents barge into the home of Sidney Cranmer, accusing him of possession of child pornography, the respected literature professor’s life becomes a nightmare. Cranmer insists the illicit material is not his, but the charge appears airtight, and his academic specialty—the works of suspected pedophile Lewis Carroll, author of Alice’s Adventures in Wonderland—convinces investigators he is lying.

The Honorable David S. Norcross regrets not recusing himself from this routine criminal case, especially considering that his girlfriend, Claire Lindemann, knows the defendant and is convinced he is innocent. Soon, she will take matters into her own hands. Meanwhile, a family tragedy leaves Norcross responsible for his two young nieces, and a separate investigation identifies a murderous predator still at large. Now Judge Norcross must navigate through a maelstrom of deceit, revenge, and unspeakable evil looming over everyone he loves.

First, I hope that readers of THE ONE-EYED JUDGE will relish the pleasure of good story. The characters are drawn to be vivid and engaging, and the plot is crafted to be compelling. The central goal is a good, absorbing read. Second, almost as important, the reader should take away increased familiarity with the American criminal process as it actually unfolds, with an in-the-trenches perspective coming from the major players—the lawyers, the law enforcement officers, the clerks, the witnesses, the defendant, and particularly the judge.

Many books address crime and the courtroom. My books (The Hanging Judge and THE ONE-EYED JUDGE) aim to provide a uniquely fine-grained view of criminal justice from the inside, based on my 33 years as a federal judge. This world has been my life. My intent is to bring readers onto the bench and put the robe on them, let them feel what it is like to sit up in that big black chair with a person’s life on the line, making the difficult decisions. No other novel in this genre—at least none that I’ve encountered—offers this kind of intimate experience of the emotional climate, the actual feel, of the courtroom.

A novel is as much a journey for the writer as the reader. As I’ve written fiction about the American judicial system, I’ve re-discovered for myself how very difficult and precious that system is, and how hard it tries, however clumsily, to do the right thing. Meting out justice is a very human endeavor. No system that I know of, either in the history of humanity for the past 10,000 years, or on the whole of the globe today, works so ardently to be fair, to allow people to be heard, and to dispense justice without regard to status, as our American system. Sometimes the system fails, but more often it actually succeeds. There is real nobility, and real anguish, in that effort.

Two themes run through the book that are not highlighted on the jacket or in the promotional material. The first is the sometimes dark power of sex. This side of the human character draws its force out of the uncontrolled recesses of the unconscious—a wellspring of love and creativity and also, sometimes, of terrible evil. The second, connected theme relates to children and how daunting the task is to raise them and keep them safe in a world bristling with threats and destructive influences. The struggle of the central character, Judge David Norcross, to face this challenge in the context of his own life is one of the engines of the plot.

I admire writers who can convey complexity in a clear accessible style. These include authors like George Orwell, James Agee, Michael Cunningham, and Ann Patchett. In crime fiction, I particularly admire Scott Turow’s Presumed Innocent, which—next to “Call me Ishmael”—took off with my all-time favorite opening line: “This is how I always start.” I absolutely love Dorothy L Sayers’ Peter Wimsey series. John Grisham and Nora Roberts have provided me tutorials in creating solid, satisfying characters and plots. I always enjoy their books. For thrillers laced with laugh-out-loud comedy you can’t beat Carl Hiaasen. 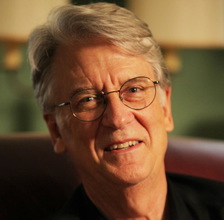 Michael Ponsor graduated from Harvard, received a Rhodes Scholarship, and studied for two years at Pembroke College, Oxford. After taking his law degree from Yale and clerking in federal court in Boston, he began his legal career, specializing in criminal defense. He moved to Amherst, Massachusetts, in 1978, where he practiced as a trial attorney in his own firm until his appointment in 1984 as a U.S .magistrate judge in Springfield, Massachusetts. In 1994, President Bill Clinton appointed him a life-tenured U.S. district judge. From 2000 to 2001, he presided over a five-month death penalty trial, the first in Massachusetts in over fifty years. Judge Ponsor continues to serve as a senior US district judge in the United States District Court for the District of Massachusetts, Western Division, with responsibility for federal criminal and civil cases in the four counties of western Massachusetts. THE ONE-EYED JUDGE is his second novel.