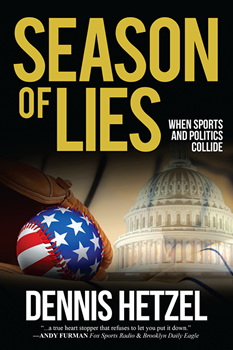 A pitcher. A president. Two men become linked by events when the stakes are highest. The Chicago Cubs have finally won a World Series for the first time since 1908. Now they want to build a baseball dynasty. To do so, they trade for star pitcher Trey Van Ohmann. Meanwhile, the Cubs’ biggest and best-known fan, Luke Murphy, is running for re-election as President of the United States.

But world events and powerful, unknown forces conspire against them. To succeed, they must overcome terrorism, scandals, and threats to their lives and those around them. The baseball season and a presidential campaign that could be ripped out of today’s headlines intertwine in one fateful October.

In this follow-up to his award-winning novel, Killing the Curse, Dennis Hetzel once again combines sports, politics, thrilling action, and memorable characters. The Big Thrill had the opportunity to ask him some questions about SEASON OF LIES:

Well, first and foremost, I just want to tell a compelling and literate story with rich characters. I do want people to realize that this isn’t a throwaway book “about the Cubs.” The Cubs with their history and charisma simply provided a great platform for a thriller that blends the worlds of sports and politics.

On more of an activist level, I share the frustration of many Americans with our political system and the challenges (and temptations) facing the media, which I have seen first-hand as a journalist and now a lobbyist for the media industry. My fiction is a modest effort to accessibly demonstrate the need for change and the degree of difficulty involved. That is particularly true as long as we have elections in which between 30 percent and 60 percent of eligible voters stay home.

There really is no predicting what individual readers will find most meaningful, and that is one of the joys of writing. I have been to book clubs in which readers talked about aspects of my first novel that resonated with them in ways I had never imagined when I wrote those lines. My stories also touch on everything from the impact of alcoholism to the fallout from toxic relationships to themes of corruption. If I reach you in some way, that’s a wonderful feeling.

There are few authors who are doing what I am doing, which is mixing the worlds of sports and politics. (Harlan Coben is an exception who comes to mind with his similar blend of sports and detective thrillers.)

I am fascinated by the parallels in these two areas, including the influence of power, money and personal charisma, and an obsession to succeed so deep that it almost guarantees character flaws that can prove to be fatal.

“Sports fiction” is an odd space. I doubt that most people know that most of the best-sellers in that genre basically are “sports porn”—Fifty Shades of Gray with hot jocks. (Beautiful stories like Grisham’s “Calico Joe” are exceptions.) So, it seems to me there is room for authors with fresh approaches.

As more experienced authors know, every novel is a journey of discovery. Although I learned this in the first novel, it is still a surprise to me that you dig far deeper into your own issues, memories and experiences than you anticipate as you write.

Though I think I know quite a bit about politics, I still had to do considerable research. For example, I have a new appreciation for how much the political parties have gamed the system to make it difficult for third-party candidates to get on ballots. I also had to do a lot of research on the probability of certain, odd astronomical events that are critical to the story.

The biggest surprise was the real-world Cubs winning the World Series in 2016. I thought they were at least a year or two away from achieving that, or maybe “the curse” was real, and they would continue as lovable losers in perpetuity.

As a result, I rewrote the beginning of the book so my fictional Cubs would win the Series instead of lose it. This happened after my publicist pointed out how dated the initial version would sound. The irony was that it improved the story. I had to create some situations and reinvent scenes that ultimately did a better job of setting events in motion and explaining characters’ motivations.

1) There’s a lot you can learn on an emotion-charged car ride between Milwaukee and Madison, Wis.

2) My most memorable secondary character is “Whisper,” the pitching coach of the Chicago Cubs. He’s hard to understand, but when he talks, you better listen.

3) All the events in the book are triggered by two astronomical events that, while unlikely, are not impossible. First, the world anticipates viewing the visible tail of a comet approaching the Earth. When they finally see it, the fiery tail is in the shape of a cross. Shortly after the comet appears, an uncharted meteor fragment kills Islamic tourists in the Indonesian island of Bali.

The sweep of David Halberstam’s non-fiction writing always remains an inspiration. Other non-fiction authors in history/politics/sociology who have been influential include the late Theodore White, George Packer, Malcolm Gladwell and James B. Stewart. All of them touch on themes that Americans must try to understand. The book I’m recommending now to everyone I know is J.D. Vance’s “Hillbilly Elegy.” No one influenced me more in my formative college years than Hunter S. Thompson and Tom Wolfe.

In sports non-fiction, you also have to name Halberstam. To that, I definitely would add Roger Kahn (probably the greatest baseball writer ever) and John Feinstein.

In fiction, I like science fiction, political thrillers, legal thrillers, detective novels and some sports fiction. Isaac Asimov will live forever with me. I think Scott Turow’s and John Le Carre’s work will survive as true literature. I love Michael Connelly, maybe in part because, like me, he was a newspaper reporter. His books are beautifully organized puzzles. Harry Bosch may be the best police character ever. I would also list DeMille, Grisham, Baldacci, Coben, Preston & Child, and Vince Flynn as contemporary influences. Not a surprising list, I’m sure. 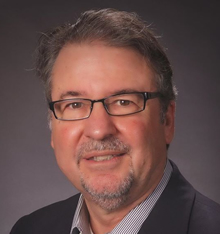 As a native of Chicago, cheering for the Chicago Cubs, loving baseball and obsessing about politics come naturally to Dennis Hetzel. SEASON OF LIES is his second novel, following the award-winning Killing the Curse (written with Rick Robinson) in which events precede those that unfold in the latest novel.

As a journalist and media executive, Dennis has won numerous awards for writing, industry leadership and community service, including the 2003 Paul Tobenkin Memorial Award from the Columbia University Graduate School of Journalism for leadership in coverage of race and diversity issues. Since 2010, he has been president and executive director of the Ohio News Media Association in Columbus, Ohio, and president of the Ohio Coalition for Open Government.

He began his career as a weekly newspaper sports editor in the Chicago suburbs and has been a reporter, editor, general manager and publisher at newspapers including the Madison, Wis., Capital Times, the Cincinnati Enquirer and the York, Pa., Daily Record, where he was editor and publisher for 13 years. Under his leadership, the York paper won national awards from the Scripps Howard Foundation in public service journalism and a Robert F. Kennedy Journalism Award. He also has taught journalism at Penn State and Temple universities.

Dennis has a degree in political science and a minor in journalism from Western Illinois University, where he met his wife, Cheryl, a school psychologist and guidance counselor.

They have three grown children and a home they love in Holden Beach, North Carolina, where he does much of his writing. He’ll also play guitar with anyone at any time.

To learn more about Dennis, please visit his website.