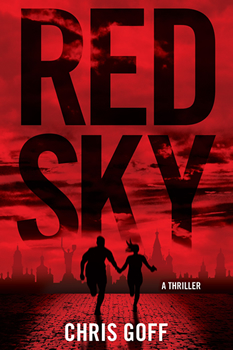 When People’s Republic Flight 91 crashes in northeastern Ukraine with a U.S. diplomatic agent onboard, U.S. Diplomatic Security Service Agent Raisa Jordan is sent to investigate. The agent was escorting a prisoner home from Guangzhou, China, along with sensitive documents, and it quickly becomes apparent that the plane was intentionally downed. Was it to silence the two Americans onboard?

To avoid a diplomatic incident, Jordan must discover what the Americans knew that was worth killing hundreds to cover up. With Russia deeply entangled in the Ukraine and the possibility that China could be hiding reasons to bring down its own plane, tensions are high.

As international relations and even more lives hang in the balance, Jordan races to stop a new Cold War.

The Big Thrill had the opportunity to discuss RED SKY with award-winning author, Chris Goff:

First, I hope they are entertained. This is an international thriller laced with espionage, politics and intrigue. Second, I hope they learn a little something about the geopolitics of Eastern Europe and China. I learned much more than I could include in the pages while researching the novel, and the region is fascinating.

RED SKY touches on current events in Eastern Europe, visits the history behind the current affairs and explores possible future scenarios—all while entertaining the reader. If it does nothing else, it should make the reader think about the area and what’s going on there. Additionally, while there are quite a few well-known international thriller writers writing in the political/espionage/geopolitical world, women writing in that genre find it difficult to make inroads. Eight well-known female writers in the genre (Gayle Lynds, KJ Howe, Jamie Freveletti, Francine Mathews, Karna Small Bodman, Sonja Stone, S. Lee Manning and myself) have formed a group called Rogue Women Writers in hopes of drawing attention to some of the talented women writers working in the genre.

My protagonist, Raisa Jordan, a diplomatic security service officer, spends some time exploring her family history in Ukraine. What she learns has ties back to decades old science projects of the Soviet Union—all programs based in history. I find it fascinating how history informs the future, and it does so even more prominently in developing countries.

I am an avid reader of the genre. Of course, I cut my teeth on Helen MacInnes, one of the first female espionage writers. On the contemporary front, two of my favorite authors (along with the women I mentioned above) are Alex Berenson and John Gilstrap. I enjoy reading thrillers, and the masters of the genre have set a high bar. I am constantly stretched to be a better writer, and I appreciate the challenge. 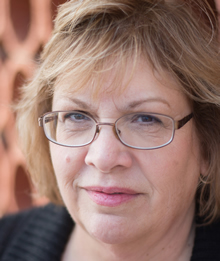 Chris Goff, an award-winning mystery author, began her career as a newspaper columnist. She has taught writing workshops and has served on the national board of Mystery Writers of America. DARK WATERS, the first in her debut thriller series, is set in Tel Aviv amid the Israel-Palestine conflict, and was a finalist for the Colorado Book Awards and the Anthony Award for Best Crime Audiobook. Now, recently back from a research trip to Ukraine, Goff’s second in the series, RED SKY, is scheduled for release June 13, 2017.

To learn more about Chris, please visit her website.