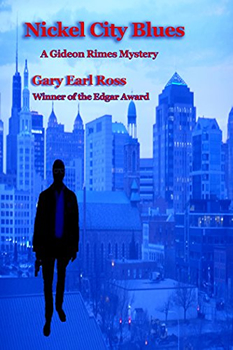 Buffalo, New York, private investigator Gideon Rimes, a black Iraq-war vet and retired army CID detective, is hired to protect blues singer Indigo Waters from her ex-boyfriend, a police officer who serves as a driver and personal bodyguard for Buffalo Mayor Ophelia Green. When the boyfriend is murdered, Rimes is the prime suspect. He’s arrested but police are forced to release him due to a lack of evidence. As the cops search for clues to tie Rimes to the murder, he begins his own hunt for the killer, uncovering a plot that involves city leaders, a wealthy business owner, corrupt cops, access to control of a half-billion-dollar project—and a dark family secret that someone will do anything to keep hidden, regardless of who they have to kill…

As a black writer who tries to capture the diverse cultural and social intersections of modern America, I hope readers find NICKEL CITY BLUES engaging and the central characters compelling enough to make them read future Nickel City titles.

Gideon Rimes is a middle-aged African-American veteran working as a private investigator in Buffalo, New York. NICKEL CITY BLUES begins a series with an atypical character firmly rooted in an atypical location, a culturally diverse, often-ignored Rust Belt city on the cusp of a Renaissance. I hope the book gives the avid mystery reader a new place to visit and new characters to follow.

Laying the groundwork for a new series has made me even more keenly aware of my hometown’s history and cultural relevance. Buffalo has a richness of locations and landmarks and artistic, cultural, and ethnic communities just waiting to be worked into mysteries.

Gideon Rimes is a passionate, thoughtful man raised by his godparents in the wake of his parents’ deaths. By the time the story begins, his godmother has died, and his godfather, a retired professor, has bought an apartment house, where Gideon and he occupy separate units. Gideon has a foster sister, Mira, who works as a medical examiner and a former partner paralyzed in a shootout with spree killers during Gideon’s brief post-army job as a campus police officer. These and a few others are recurring characters who will appear in future books.

Ray Bradbury and Stan Lee first made me want to be a writer. James Baldwin and John A. Williams made me appreciate what it meant to be a black male writer. Leslie Fiedler and Carlene Hatcher Polite were writers who were also my professors. Joyce Carol Oates, Margaret Atwood, and Toni Morrison showed me the darkness of the human heart. Gabriel Garcia Marquez, Jorge Luis Borges, and later Isabel Allende taught me how make magic with words. Stephen King and Tennessee Williams showed me I could write about anything. Dashiell Hammett, Agatha Christie, Jeffery Deaver, Michael Connelly, and Robert B., Parker all convinced me I could delve into mysteries. 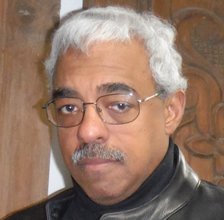 Playwright, novelist, public radio essayist, and popular culture scholar, Gary Earl Ross is a retired University at Buffalo professor. His works include 60+ published short stories, the historical novel Blackbird Rising and the new mystery NICKEL CITY BLUES, as well as the plays Picture Perfect, Murder Squared, The Scavenger’s Daughter, Matter of Intent, The Guns of Christmas, The Mark of Cain, and The Trial of Trayvon Martin (onstage in the spring of 2017). His honors include the Edgar Award from Mystery Writers of America for Matter of Intent, Emanuel Fried Outstanding New Play Awards for Matter of Intent, The Guns of Christmas, and The Mark of Cain, a LIFT Fiction Fellowship, an ASI-DEC artist’s grant for fiction, a Saltonstall Foundation Playwriting Fellowship, public radio commentary awards from the New York Associated Press and the New York Broadcasters Association, and numerous awards for teaching and service.