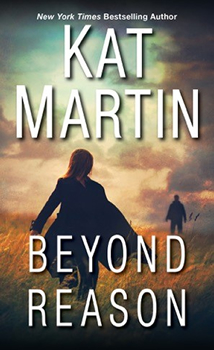 She’s written 68 historical and contemporary romantic suspense novels, been published in 20 foreign countries, and has had 15 novels in a row on the New York Times bestseller list. I wanted to ask her if I could rub her head for luck, but instead I asked about the secret to her prodigious output.

“The secret to my productivity is that I don’t have kids and I am a workaholic!” she says. “Plus, I love writing. Also, my husband loves writing, so that’s mostly what we do.”

With a major in Anthropology, she’s clearly fascinated by people and their motivations. “Anthropology is the study of people,” she says. “Every writer is an amateur psychologist, so they kind of work together.”

She brings this understanding of human psychology to her latest novel, BEYOND REASON. Carly Drake, a strong-minded girl-next-door who has recently inherited her grandfather’s trucking company, and Lincoln Cain, a wealthy competitor with a checkered past, both struggle with a fear of love and the vulnerability that goes along with it. In their shared commitment to solving the murder of Carly’s number one driver while honoring her grandfather’s memory, both begin to lower their emotional defenses. The result is a satisfying read with a good balance of action and romance.

Here, Martin chats with The Big Thrill about her new book and her writing process.

Welcome, Kat. Why don’t we start with a little bit about your writing journey and how you came to be a mystery writer?

I’ve been writing for more than 30 years—quite a journey for sure! I never had any intention of becoming a writer, but fate had another idea. My husband had written a novel that I read and loved. I dug in to help him with the editing and got hooked. I remember saying, “I think I can do this.” Magnificent Passage was my first. It was chosen as a lead title, which gave me a good start in the business.

Though I started writing historicals, all of them had a mystery plot. The Silent Rose was my first romantic suspense—a ghost story based on a true incident. The book got a RITA nomination and my suspense career was launched.

Since then, your books have sold millions of copies. What do you think is the secret to that level of success?

Persistence. That’s the key. I’ve lost agents, publishers, companies have closed their doors. But I never gave up. I knew I wanted to write and nothing was going to stop me.

Do you do a lot of marketing and promotion?

I don’t do a lot of social media, though I try to get on Facebook every couple of days. My assistant sets up blogs for me. I do a few chats. Some advertising. I need to do Twitter but don’t.

Obviously, you write in a popular genre. What do you think gives romantic thrillers such lasting appeal?

What’s better than romance combined with an exciting plot? I think it’s as simple as that. A strong plot is good reading. Add a love story, and the combination is irresistible.

How does the romance complement the action and vice versa?

I really enjoy writing the romantic journey along with the action. In my books, one can’t exist without the other. The attraction grows from the strength each glimpses in the other as they solve the mystery.

Where did you get the inspiration for BEYOND REASON?

I never really know where my story ideas come from. Something I read, perhaps, that stayed in my mind and finally surfaced. I knew I wanted to write a mega-rich hero. Lincoln Cain was so dynamic the story took off from there.

Speaking of inspiration, which authors have influenced your writing, and in what way?

Early on, I relied heavily on a How-To book by Dean Koontz. He is such a wonderful author. Wilbur Smith is one of my heroes—big, bold romantic suspense novels. Anya Seaton, Frank Yearby, and Kathleen Woodiwiss for romance.

I write A LOT.  Two long days a week, three half days after the gym. Two long days on the weekend. I live in the country and I love it. I want to be quietly immersed in the pages of the novel I’m writing.

I know you do a lot of research. What’s the most unusual thing you’ve ever done when researching a book?

I’ve written two ghost stories, both based on real incidents. The second one occurred as I wrote the novel, Scent of Roses. It involved the ghost of a six-year-old girl murdered by a serial killer couple in the 1960s. The research was ghoulish and scary. The ghost story, which unfolded over a six-month period, was equally ghoulish and even more scary.

BEYOND REASON involves the trucking industry. What sort of research did you have to do for that?

My dad was a trucker, which gave me a useful background. I had been in the cab of an 18-wheeler, knew that my mother had once driven the truck for a few hundred miles. For BEYOND REASON, I went to the local driving school and talked to former drivers. I got a lesson while sitting in the cab and the guys told me some great stories. One appears in a high action scene in the book.

Set your goals and just keep going. Don’t try to write to the market because it will change before you get the book finished. Write your story and don’t give up until it’s published.

What’s next? Will we see more of Carly and Linc?

Carly and Linc show up in Beyond Danger and Beyond Control, books 2 and 3 in my Texas trilogy. They were great characters to work with.

Just that I’m grateful to all the readers who have been so supportive through the years. I hope they continue to enjoy my books! 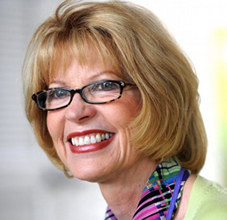 Kat has written more than sixty-five novels. Sixteen million copies of her books are in print and she has been published in twenty foreign countries, including Japan, France, Germany, Argentina, Greece, China, Russia, and Spain. Born in Bakersfield, California, Kat currently resides in Missoula, Montana, on a small ranch in the beautiful Sapphire mountains.

Her last 15 books have hit the prestigious New York Times bestseller list. INTO THE FIRESTORM, INTO THE WHIRLWIND and INTO THE FURY — her most recent releases, all took top ten spots.

To learn more about Kat, please visit her website.