Where Characters Come From 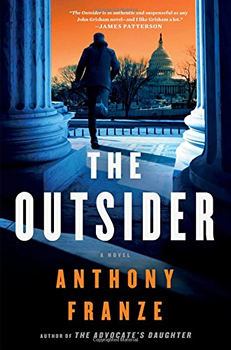 On a hot, humid July evening in midtown Manhattan, a dozen members of the ITW’s debut class of 2013 were heading up Lexington Avenue in anticipation of a celebratory dinner. Without warning, a heavy—and improbably cold—rain started falling. Five of the fledgling writers had come unprepared for inclement weather. One of them, Anthony Franze, darted inside a convenience store, purchased the shop’s entire inventory of umbrellas, and handed them out to his drenched colleagues. Only after the group had walked another half block did anyone notice that Franze didn’t have an umbrella himself because the store only had four left.

It’s hardly surprising that Franze, now a critically acclaimed writer of three thriller novels and an attorney who practices before the U.S. Supreme Court, identifies as his favorite opinion Gideon v. Wainwright, a 1960s case in which the Court held that rich and poor alike have the right to counsel if the government seeks to lock them up. But Franze’s compelling new thriller, THE OUTSIDER, prominently features several of the Court’s most infamous opinions. 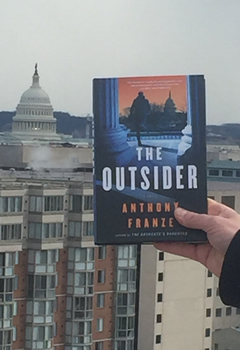 Franze is intimately familiar with the ways of Washington, DC.

Aptly described as The Firm meets the Supreme Court with a dash of the movie Seven, the novel tells the story of Grayson Hernandez, a young lawyer who grew up in a hardscrabble Washington, D.C., neighborhood and scrapped his way out of the District’s underfunded public school system and into law school. Things aren’t going well for him. He’s drowning in student debt, and because he graduated from a fourth-tier law school, the only job he can find is as a messenger. His life takes an unexpected turn when he intervenes in a violent mugging of the Chief Justice of the Supreme Court, who offers Grayson a job as a law clerk, one of the most sought-after legal jobs in the country. Soon, his brilliant new friends, the extravagant perks, and the prestige of working for the Chief Justice seduce Grayson, who becomes estranged from family and old friends. But just as he begins to settle into his new life, FBI Special Agent Emma Milstein approaches him with unsettling news. The Feds are investigating a string of related killings, and they think the serial killer might be connected to the Supreme Court. They ask Grayson to be their eyes and ears inside the Court to help catch the murderer, and he agrees. Ultimately, Grayson’s status as an outsider causes the FBI to suspect him of the killings.

“The novel explores what it means to become an outsider and the perils of forgetting where you came from,” Franze says. “Most supreme court clerks tend to be cut from the same cloth: advantaged upbringings, Ivy League legacies, the gunners you loved to hate in law school.” Franze thought it would be intriguing to put a young street lawyer who was raised in a dangerous part of D.C. alongside the more privileged. “Don’t get me wrong,” Franze adds. “I have many close friends who were SCOTUS law clerks and are wonderful people. It’s just more fun to cast them, as the late Justice Douglas called the clerks, as ‘the lowest form of animal life.’” 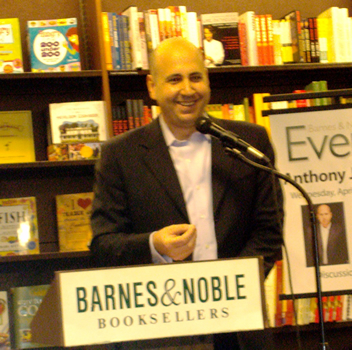 At a bookstore launch.

Though THE OUTSIDER is a classic page turner, the novel also confronts important social issues—lack of diversity among law clerks, the morality of the death penalty, and the inability of the criminal justice system to right all wrongs. Maintaining a balance between an accurate portrayal of the legal system while keeping the pages turning can be a formidable task for legal thriller writers, but Franze does so seamlessly. “For THE OUTSIDER, I attempted to follow Elmore Leonard’s famous rule of writing,” Franze says. “‘Try to leave out the part that readers tend to skip.'” At its core, THE OUTSIDER is really a murder mystery.” Luminaries who’ve praised THE OUTSIDER include James Patterson, Lisa Gardner, J. T. Ellison, Linwood Barclay, and James Grippando.

Franze is currently working on his fourth novel, a domestic thriller set in the Supreme Court community. He credits his law practice and his three children for teaching him discipline as a writer. “After several books, I have a good system down now. I write late at night, three to four nights a week if I can manage it. I don’t wait for ‘inspiration,’ I just get words on the page. I think that’s the secret to finishing a novel. Then I edit on the subway to and from my law office in downtown D.C.  I’m the guy who jumps up suddenly because he’s missed his stop.”

Not umbrella-less in the rain, one hopes! In any case, Franze misses none of the stops in THE OUTSIDER.