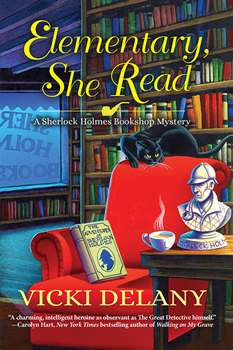 Canadian author Vicki Delany last sat down with The Big Thrill in December, during the release of her holiday-themed mystery We Wish You a Murderous Christmas. This time Delany is back with ELEMENTARY, SHE READ, the first in a delightful new series featuring Gemma Doyle, the owner of a bookstore in Cape Cod that specializes in all things Sherlock Holmes. Like the great fictional detective, Gemma, a transplanted Englishwoman, uses heightened powers of deduction to root out evil intentions and solve murders.

I had the pleasure of talking with Delany about her new Sherlock Holmes Bookshop series, her thoughts on the cozy genre, and the importance of networking for writers.

ELEMENTARY, SHE READ is a fresh, smart, engaging whodunit with an interesting premise: an amateur sleuth (Gemma Doyle) not only owns the Sherlock Holmes Bookshop and Emporium but also has impressive detective skills in her own right. What was the inspiration for this new series?

There isn’t much hotter in popular culture these days than Sherlock Holmes; people can’t seem to get enough of him, so when I was looking for an inspiration for a new series, I intended to create a fairly traditional cozy about a woman who owns a speciality bookshop. I planned to throw in bits of Sherlock-ania and references to the modern pastiche novels as well. But almost as soon as I began writing, the Gemma Doyle became Sherlock-like. And that’s been an enormous amount of fun.

What has drawn you to the cozy subgenre of crime fiction?

I love writing cozies, I love creating the characters, the communities, and at this stage in my career, I am enjoying keeping things on the lighter side.

The police department of West London, Cape Cod, has considerable trouble accepting Gemma’s observations and conclusions, thus they are always suspecting her of somehow being responsible. In particular Detective Louse Estrada (get it? Lestrade).

Fun! Nothing but fun.

How does this novel make a contribution to the genre?

Sherlock Holmes as a young woman in a modern cozy series. On first glance this is a standard cozy mystery—set in a book shop in Cape Cod. But look again, and the protagonist is something very different. A modern young woman with a thought process (and social habits) quite a bit like that of the Great Detective.

It came as a surprise how many books there are out there in the Sherlock pastiche. It’s not so far-fetched to imagine a bookstore that specializes in Holmes.

I also found that I loved trying to think like Sherlock but be female and modern at the same time.

You’ve written twenty-five crime novels, including the Constable Molly Smith series, the Year Round Christmas mysteries, the Lighthouse Library series (under the pen name Eva Gates), and now the Sherlock Holmes Bookshop series. What do you most enjoy about writing series? Is there an aspect of writing multiple series that you find challenging?

With series novels, you have time to really get to know a place, a community, the people. Minor characters pop up who might be interesting, but if I don’t have time to do anything with them in one book, I can always develop them more later. I have also written three standalone suspense novels, and what I find most challenging is switching mood. If I spend six months writing something gritty or menacing, it can be very difficult to suddenly try to be funny and light. What helps the most with that, I find, is reading books written in the mood I am trying to achieve.

A common piece of advice given to aspiring authors is to make a setting come to life—to have it become, in effect, another character in the novel. Setting figures strongly in your books. For instance, your Year Round Christmas mysteries are set in the fictional town of Rudolph, New York, where Christmastime is enjoyed all year. ELEMENTARY, SHE READ, on the other hand, is set in beautiful Cape Cod. Why did you choose Cape Cod? What have been the challenges of choosing a real-life locale as the backdrop for your newest mystery?

First, I wanted a place in the U.S. that would tie in as best it could to the location of Sherlock Holmes, thus New England. Specifically, Cape Cod, because I need to visit the places I am writing about, and thus I chose someplace I want to go. A win-win! The problem with using a real-life location is that if you get something wrong, people will notice. I tried to get around that by creating West London, which is a fictional town. It’s situated quite close to Chatham, so I could have the Atlantic Ocean on one side and Nantucket Sound on the other. Perfect for creating atmosphere.

For this series, definitely Sir Arthur Conan Doyle as I’ve plunged into all things Sherlock. For writing cozies, I have been strongly influenced by the light, funny style of authors such as Kate Carlisle, Jenn McKinlay, and Victoria Abbott.

You’re the past-president of Crime Writers of Canada. How has that experience helped to shape your career as a novelist? Would you suggest that new and aspiring authors get involved in the writing community, even seeking out leadership positions?

I can’t say that the time I served on the board of the CWC helped me as a novelist in any way. But I am a strong believer in community, and I have relied an enormous amount on the support I’ve received over the years from the Canadian writing community. I’d absolutely advise anyone to join their local or national writers’ organizations. Networking is important, and so are the people you’ll meet and the friends you’ll make. If people find the group useful, then volunteers are always needed to help with keeping things running.

What’s next for you, Vicki? Can readers look forward to another book in the Sherlock Holmes Bookshop series?

Body on Baker Street will be released in September, and the third book sometime in spring 2018. 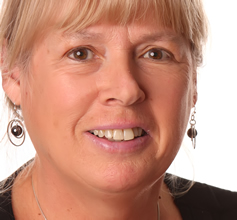 Vicki Delany is one of Canada’s most prolific and varied crime writers, author of twenty-five crime novels, including standalone Gothic thrillers, the Constable Molly Smith series, and the Year Round Christmas Mysteries. Under the pen name Eva Gates she writes the Lighthouse Library cozy series from Penguin.

The first Sherlock Holmes Bookshop novel, Elementary She Read, will be released in March 2017 by Crooked Lane Books.

Vicki is the past-president of Crime Writers of Canada.To learn more, please visit her website.