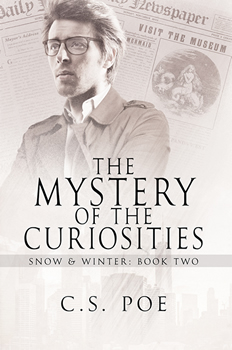 Sebastian Snow is the owner of Snow’s Antique Emporium. With an encyclopaedic knowledge of the 1800s, Sebastian and his Emporium seem to be a magnet for murderous mysteries. After The Mystery of Nevermore, Sebastian is now happily dating lead homicide detective, Calvin Winter, but when a brick is thrown through the Emporium window, Sebastian finds himself swept up in a series of grisly murders.

Author C. S. Poe tells me about her latest novel THE MYSTERY OF CURIOSITIES, the second instalment of the Snow and Winter series, as well as about her inspiration for the story and what drives her to write gay mysteries.

THE MYSTERY OF THE CURIOSITIES is Book 2 of the Snow & Winter series. Where is Sebastian Snow after the events of The Mystery of Nevermore?

Sebastian Snow is in a much healthier place after Nevermore—physically, mentally, and emotionally. He came out of an intense murder mystery relatively unscathed, and he and lead homicide detective, Calvin Winter, are happily dating. If it wasn’t for the fact that he’s become prone to trouble, Sebastian may have gotten through Valentine’s Day without having to put his sleuthing hat back on.

What was the inspiration behind the relationship between the two men?

The inspiration came from the desire to represent a partnership, both professional and personal, that was equal and balanced. Calvin is the ‘no’ to Sebastian’s ‘yes.’ I needed an individual who followed the rules, who went through the official channels, and essentially balanced out Sebastian’s innate curiosity and inability to stay out of trouble. But I think what was even more important, was I needed a character who, despite his outward appearance of being much stronger, found courage in himself by being around a man like Sebastian.

Gay fiction is growing in popularity.  As an author of gay fiction what are the challenges (both in creative writing, publication, marketing, and readership) you face when writing your books?

While popularity is growing, there is still quite of bit of research and elbow grease going into marketing books with gay heroes. What I often hear from newer readers in the community is that they simply never realized gay romance or gay mystery books were a thing, and when they do, where do they even begin? That’s where a lot of the challenge currently resides.

How do you balance the romance and mystery in the Snow & Winter series? Are you conscious of meeting reader demand?

The interactions between Sebastian and Calvin have been pretty easy to balance, but I believe their unique partnership allows for the line of professional and personal to be blurred in an interesting manner. It helps that I am a big reader and lover of both mysteries and romances myself, so when I combined the genres, I wrote them how I’d want to read a series similar to it.

Let’s talk about the crimes. The Mystery of Nevermore concentrated on Edgar Allan Poe and the macabre. Where does THE MYSTERY OF THE CURIOSITIES take us?

The second book explores the bizarre and unique world of P. T. Barnum, famously known for his hoaxes and circus, less well known for his lost museum and involvement in the world of opera. The crimes themselves are less ghastly and nightmare-inducing than what Sebastian stumbled upon in Nevermore, but I think are, in turn, a step up in complexity for him to solve.

What research did you have to do for the series?

The research I do from book to book varies vastly, as each mystery focuses on a different antique and famous individual from Victorian America. This usually includes looking up patents, researching rare collections available through the Library of Congress, visiting museums, and reading biographies. Some of the more contemporary research for the series has involved weapons, police procedures, rules and regulations for businesses in New York City, as well as achromatopsia, a vision condition that Sebastian Snow has.

When writing THE MYSTERY OF THE CURIOSITIES, what were the struggles and surprises?

One of the biggest struggles was actually the Victorian person and antique the mystery revolves around. Basically the entire plot! I went through a few concepts that worked in my head but didn’t quite take off on paper, including Cope and Marsh from the Bone Wars, a period of dinosaur fossil discovery in America. Barnum has always been someone I was interested in and did a lot of research on in my free time out of simple curiosity. I think the biggest surprise in writing this book was that I didn’t use Barnum in the plot sooner.

What’s next for the Snow & Winter series?

I’m currently working on the third book in the series, which has a tentative release date in early 2018. I can’t offer many details yet, but it’s safe to say murder and mystery aren’t keeping their distance from Sebastian and Calvin! I also have a standalone mystery coming out later this year, Southernmost Murder. It features a historian and FBI agent in Key West.

For those who enjoy conventions and events, I will be attending as a “visiting industry” at this year’s RainbowCon in Tampa from July 6 to 9, as well as an author at GRL (Gay Romance Lit) in Denver from October 19 to 22. I appreciate your support! 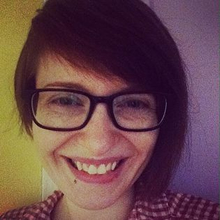 C.S. Poe is an author of gay mystery, romance, and paranormal books.

She is a reluctant mover and has called many places home in her lifetime. C.S. has lived in New York City, Key West, and Ibaraki, Japan, to name a few. She misses the cleanliness, convenience, and limited edition gachapon of Japan, but she was never very good at riding bikes to get around.

She has an affinity for all things cute and colorful, and a major weakness for toys. C.S. is an avid fan of coffee, reading, and cats. She’s rescued three cats, including one found in a drain pipe in Japan who flew back to the States with her. Zak, Milo, and Kasper do their best on a daily basis to sidetrack her from work.