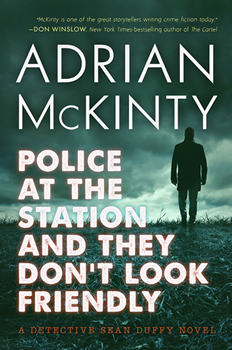 Belfast 1988: A man is found dead, killed with a bolt from a crossbow in front of his house. This is no hunting accident. But uncovering who is responsible for the murder will take Detective Sean Duffy down his most dangerous road yet, a road that leads to a lonely clearing on a high bog where three masked gunmen will force Duffy to dig his own grave.

Hunted by forces unknown, threatened by Internal Affairs, and with his relationship on the rocks, Duffy will need all his wits to get out of this investigation in one piece.

Author Adrian McKinty recently took some time away from writing to discuss his latest thriller, POLICE AT THE STATION AND THEY DON’T LOOK FRIENDLY with The Big Thrill:

I believe readers will take away a deep-seated feeling of anger that will turn into full blown rage at the waste of their time and money in reading my new novel. I hope their growing fury motivates them to demand their money back from the publisher or possibly ignites a Michael Kohlhaas style over reaction that leads to the fall of the imprint, the publishing house, the Republic and capitalism itself.

I trust that this book will kill the genre stone dead and discourage future efforts along this road.

Was there anything new you discovered as you wrote this book?

Yes, I discovered a new continent south west of Tasmania but that’s all I’m saying about it here because I want to keep its riches (largely edible kelp) to myself.

One PR man wrote the following (but they wouldn’t let his copy go on the jacket): “It’s clearly the unedited ravings of a lunatic—Do Not Publish.”

Philip K. Dick’s period when he wrote 12 novels in six months under the influence of acid, horse tranquilizers and meth amphetamines.

“McKinty is one of Britain’s great contemporary crime writers and the Sean Duffy books are his masterpiece.” ~IAN RANKIN, New York Times bestselling author of Rather Be The Devil (An Inspector Rebus Novel) 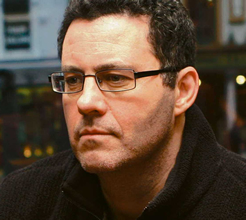 Adrian McKinty is the author of 18 novels, including the Detective Sean Duffy novels The Cold Cold Ground, I Hear the Sirens in the Street, In the Morning I’ll Be Gone, Gun Street Girl, and Rain Dogs and the standalone historical The Sun Is God. The Cold Cold Ground won the Spinetingler Award. I Hear the Sirens in the Street won the Barry Award and was shortlisted for the Ned Kelly Award. In the Morning I’ll Be Gone won the Ned Kelly Award and was selected by the American Library Association as one of the top-10 crime fiction novels of 2014. Gun Street Girl was shortlisted for the Anthony, Ned Kelly, and Edgar Awards. Born and raised in Carrickfergus, Northern Ireland, McKinty was called “the best of the new generation of Irish crime novelists” in the Glasgow Herald.