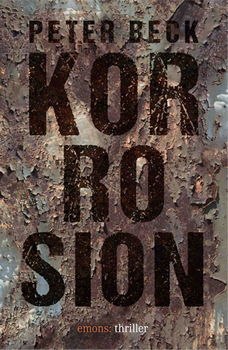 A caramelized baker. A lonely old woman, beaten to death at Christmas finished off with a needle through the eye. The suspect, a Sudanese refugee, gone into hiding.

The dead widow not only leaves behind a million-dollar inheritance, but also a bitter accusation: From beyond the grave, she claims that one of her children killed her husband.

Tom Winter, the laconic head of security of her Swiss private bank, tracks down the children in the Azores, Manchester and Nuremberg, and finds himself entangled in a horrifying net of abuse, exploitation, and revenge.

A sleepless night, breathless hours of entertainment, an intercontinental flight gone by fast, being engrossed in the corrosive effects of abuse, exploitation and revenge, be it on the victims or on the witnesses.

A Nuba warrior is one of the key characters in KORROSION. He travels from his native village in Sudan to Europe, sacrificing a lot. Maybe the memory of Obado’s journey gives some insight into what’s going on with migration.

Tom Winter, the series hero, is head of security at a discreet Swiss bank. This is a unique role in the thriller genre with many opportunities for plot development.

For example, the bank has clients all over the world, which means that Tom Winter travels a lot, giving the series an international perspective. In KORROSION he travels to the Azores, to Nuremberg where the Nazi trials took place, and to gritty Manchester in England.

As Tom Winter is not the usual police inspector or private eye, he has much more freedom to set the world to rights. And he has a dilemma: Do the right thing or help the bank maximize its profits? We all face that quandary at one time or another, albeit usually on a smaller scale.

Two things. When I researched migration, I became much more aware of the many tragic individual fates hidden behind the numbers. You could write a book about each one of those journeys. In the media, we mostly hear some anonymous numbers—and then most of us shut them out immediately, after all we’re busy and have enough to worry about.

The second thing is more about the writing process. I noticed it when I was editing KORROSION. I cut everything with only a hint of being boring or redundant, be it an unnecessary word, a sentence, or whole chapters. Encouraged by my editors, I killed more than a quarter of my initial draft. That was really hard.

Don’t trust your prejudices. All of us have instincts. They’ve helped us to survive for a long time, to react instinctively in the jungle. In today’s fast-paced Facebook and Twitter world, I feel that we should more often take a step back and think before we judge.

In KORROSION I tried to use the readers’ prejudices to send them down several wrong alleys. So, don’t let yourself be fooled!

Tartan Noir by Ian Rankin, Denise Mina, and Stuart McBride. Or Tana French from Ireland. I’m also a fan of Scandi Noir, be it Stig Larsson, Adler Olsen or Jo Nesbø. I guess, coming from Switzerland, I easily identify with the often overwhelming power of nature in these countries, e.g. the finale of KORROSION takes place in the icy mountains around Lucerne.

I also love Lee Child’s Jack Reacher. Like Tom Winter, Reacher roams freely, but finds himself in situations where he must intervene. As a reader, I’m really addicted to series. For me, it’s essential to understand why I let myself get sucked in by them so much.

As a youngster, I devoured Simenon’s Commissaire Maigret series, fascinated by how Maigret dissected his suspects psychologically. More recently, I read all the Bernie Gunther novels by Philip Kerr, who very cleverly connects the world’s turmoil with Gunther’s destiny. And his outrageous metaphors make me smile. 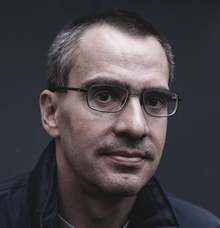 Peter Beck studied Psychology and Economics in Bern, Switzerland, where he also gained a doctorate. He went on to do an MBA at Manchester Business School, UK, and has a black belt in judo, was an executive board member of a large Swiss company, and sat on several non-executive boards.

Today Peter Beck is his own boss and supports businesses and organizations in shaping their corporate culture. He is a member of the International Thriller Writers and the German-speaking crime writers’ association, Syndikat.

The Art of Vanishing by Cynthia Kuhn