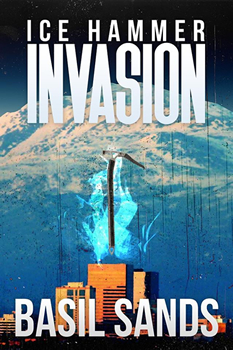 When an invasion splits Brad Stone’s family apart he finds himself fighting for his life as he searches for his family. His wife, Youngmi, is captured and exploited by Alaska’s new Communist warlord. His sons narrowly avoid massacre and retreat into the icy wilderness with a troop of Boy Scouts. Brad, a former Marine, finds himself thrust to the front as the warrior they call “Ice Hammer”, and thanks to a drone image of a vicious combat encounter, Brad finds himself listed as the most wanted man in Alaska.

Brad, Youngmi, and their sons Ben and Ian must find their way through the horrors of war. They may not live to see victory, but they will not live as slaves. They have already learned a brutal truth:

The age of peace has ended. The age of the Ice Hammer has begun.

The Ice Hammer series is a story about ultimate loss and overcoming the chaotic mess of life during the struggles of war. Brad Stone loves his family and will do anything to get them back, but with hundreds of miles of Alaska wilderness between them, he realizes he also has a duty to help those within reach and leave what he cannot do to the hands of God. Each of the various family members struggles through their own version of the horrific difficulties hoping to survive, and praying they will one day be reunited.

ICE HAMMER: INVASION steps into the thriller genre with the intention of growing thrills not only by way of physical action, big guns, fights and booms, but by exploring hard emotional issues of people caught up in war. It deals with heroes who do things while they’re young that they don’t realize are scarring their psyche. It is in a round about way, an overhead view of the events that can cause what we know of today as PTSD, but what the boots-on-the-ground think of as “just doing what I had to do.”

As I wrote ICE HAMMER, both the already released book INVASION, and as I finish the subsequent books Insurgent and Invincible, I chose to use characters based upon my actual family. It all started out as a sort of mental exercise to put together my own TEOTWAKI plan, (TEOTWAWKI —The End Of The World As We Know It.) I said to myself, what would happen if my family was in these places and these events happened and I was not there to help them escape? As I wrote, I cannot tell you how emotionally caught up I became, picturing my own wife and sons in the roles of the main characters. I’ve written several thrillers in the past, but never have I been so emotionally attached as with ICE HAMMER.

You will learn that Alaska is more than just winter, that it is even more beautiful in real life than the posters and travel adverts. You will learn that people can actually survive living out in nature at -50F. You will also learn that regardless of the season or how beautiful it is, the Alaskan wilderness is not a typical state park, nature itself can kill you in an instant. This place is not for the faint-hearted.

There have been several who have influenced me as a writer. Early on I’d say James Clavelle and Fredrick Forsyth were among those who took my mind into other worlds right here within our own, and made me think, “Wow, I want to do that.”

A couple of other authors that have influenced me more on the technical side of writing would include John Gilstrap and James Scott Bell, both of whom I originally met via their blog The Kill Zone years ago. As an audiobook narrator I have had the utter delight to perform two novels by James, and am the voice of John’s Jonathan Grave Series for the past seven books now. From both of their writing, I have learned how to create tighter prose, get rid of the fluff, and put the story into the reader’s head.”

“Basil Sands’ ICE HAMMER: INVASION is a gripping, can’t-put-it-down thriller that works at every level. It’s got it all: love, war, treachery, and heroism. A home run!” ~John Gilstrap, USA Today bestselling author

“Sands is fearless in his storytelling, and tireless in his quest to connect directly with his audience.” ~Scott Sigler, New York Times bestselling author

“Basil Sands is one awesome writer, penning stories pumped with enough adrenaline that you’ll suffer from insomnia until you read the last word. This is one writer not to be missed.” ~Jeremy Robinson, International bestselling author 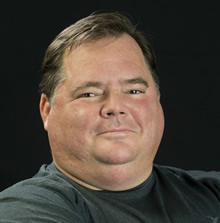 Author of several action-packed novels and numerous short stories, Basil built an audience of tens of thousands of readers and audiobook listeners. His stories have been called “Pulse Pounding” and “Breathtaking.” Give them a read and judge for yourself.

Basil does not just write stories, but has lived a lot of what they contain. The backdrop for his writing started with his birth in rural interior Alaska and his school years among the Ohio cornfields where he wished to be anywhere else as long as it was exciting. He has lived in Alaska, San Diego, DC, Baltimore, and Ohio. He tried a career in the Marines. After injuries sent him home early he worked at the NSA, owned a computer shop, was a carpenter, farmer, actor, lumberjack, voice actor, EMT, network admin, helpdesk supervisor, Boy Scout leader, IT trainer, radio talk host, youth minister, and was a sergeant in the Alaska Defense Force Coastal Scouts.

Until a ski injury in 2008 he had been an avid weight lifter and could bench press 420 lbs. Now he’s limited to a bit on the eliptical machine each day and hefting his laptop and an occasional pint of Guinness.

He served on the Board of Directors for the Alaska Writer’s Guild, is a member of the Military Writer’s Society of America and International Thriller Writers (ITW), and is a regular contributing editor to ITW’s The Big Thrill Magazine.

He lives in Anchorage Alaska with his wife and sons. To learn more, please visit his website.