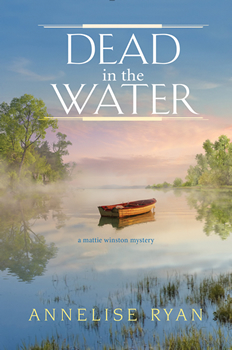 Deputy coroner Mattie Winston is starting to feel like she’s in way over her head . . .

As the single mom of an energetic toddler and an investigator working for the medical examiner’s office in small-town Sorenson, Wisconsin, Mattie is used to her life being a juggling act. But now that she’s moved in with Detective Steve Hurley and his teenaged daughter Emily, and has started planning their wedding, her home life is looking more like a three-ring circus. And with her boss and friend, Izzy, suddenly having a health crisis, she could not be more grateful for the newest staff member in the ME’s office, Hal Dawson.

All too quickly her gratitude turns to shock when a floating body found trapped against a dam turns out to be Hal, but the cause of death isn’t drowning—his throat’s been slashed. Hal was supposed to be fishing on his day off with his girlfriend. And when their empty boat is found in a nearby lake, the whereabouts of the woman becomes an even more urgent question.

To find out what really happened to her coworker, Mattie may need to rock the boat. But a killer is just as determined to keep the truth from ever surfacing, even if that means making Mattie the next one to go under.

Annelise Ryan recently discussed her novel with The Big Thrill:

That it’s difficult for today’s women to balance home and work lives, but it can be done. That’s not to say it’s easy. Readers of DEAD IN THE WATER will not only get a top-notch mystery to solve, they’ll get to see how the main character struggles with that balance and the emotional upheavals that come with it.

The Mattie Winston Mystery series has seen its main character evolve over time, both in her personal life and her professional life (this is book #8 in the series). This, combined with its unique humor and commentary on real-life issues faced by today’s women, makes it stand out from the crowd, and keeps readers interested.

There was an underlying twist, another story that needed to be told that didn’t reveal itself until the final rewrite. I think exposing it made the overall story much more dynamic and intriguing. It reveals some new characteristics about the heroine that will keep readers wanting more.

I think parenting is one of the most difficult, guilt-ridden, rewarding, and frustrating jobs a person can have! We get to traverse that minefield with Mattie as she deals with balancing her responsibilities as a parent with one of the most challenging and emotional jobs out there—working in the Medical Examiner’s office. And while the main case she works on in this book is essentially solved, it exposes a larger conspiracy that will carry over into the next book.

I grew up devouring mysteries by writers like Agatha Christie, Mary Stewart, Phyllis Whitney, Edgar Allen Poe, and others. The draw of solving the puzzle, whether it be in a classic mystery, a sci-fi mystery, a thriller, or some other genre has always appealed to me.

“The funniest deputy coroner to cut up a corpse since, well, ever!” —Laura Levine, author of Killer Cruise

USA Today bestselling author, Annelise Ryan, is a pseudonym for Beth Amos, the author of the Mattie Winston Mysteries and another mystery series written under the pseudonym of Allyson K. Abbott. She has written more than 200 published articles, had three prior thrillers published by Harper Collins under her own name, worked as a book reviewer for Barnes & Noble, and is an active member of Mystery Writers of America and International Thriller Writers. She currently works as a registered nurse in an ER.