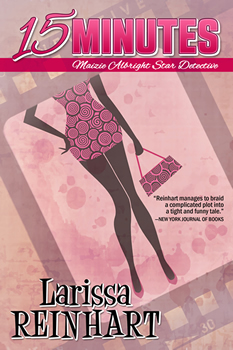 When ex-teen star Maizie Albright returns to her Southern hometown of Black Pine, Georgia, she hoped to rid herself of Hollywood tabloid and reality show hell for a new career as a private investigator. Instead, Hollyweird follows her home. Maizie’s costar is crushing, but now for her gumshoe boss. Her stage-monster mother still demands screen time. Her latest rival wants her kicked off the set, preferably back to a California prison.

By entangling herself in a missing person’s case, she must reprise her most famous role. The job will demand a performance of a lifetime. But this time, the stakes are real and may prove deadly.

Author Larissa Reinhart recently took some time to sit down with The Big Thrill and discuss her new novel:

15 MINUTES introduces the Maize Albright Star Detective series. The heroine, Maizie Albright, is an ex-teen and reality star who’s trying a career makeover as a detective. Unfortunately, her sleuthing background comes from starring in the TV show Julia Pinkerton, Teen Detective. Maizie has a big learning curve and her chosen mentor, Wyatt Nash of Nash Security Solutions, is not a willing teacher.

The series is meant to be pure entertainment with an affectionate poke at our love of celebrities and fame, particularly fallen celebrities. I was inspired by the film and TV industry growing around my town in Georgia and thought it would be a fun setting for a humorous mystery series.

15 MINUTES is part of the growing genre of humorous mysteries that don’t entirely fit in with cozy mysteries. I’d also label the Maizie Albright series as a chick lit mystery, another growing sub-genre. These types of mysteries appeal to much of the cozy audience but also to a cross-over audience of romantic comedy/chick lit readers.

I had the serendipitous experience of being part of a Reality TV show while writing 15 MINUTES (Maizie Albright is an ex-child star who later appeared in her own reality TV show before escaping Hollywood to return to her hometown in Georgia to become a detective). After I started writing the book, my family moved to Japan and applied to be on HOUSE HUNTERS INTERNATIONAL. I had actually finished writing 15 MINUTES when we filmed our episode, but was able to use that experience as additional research in my revision and for the next books in the series.

Maizie Albright—in her naÏve enthusiasm to become the detective she portrayed as a child star—takes on a seemingly easy surveillance, watching the wife of a client who for a month kept to the same boring schedule. When Maizie loses sight of the woman while arguing with her stage-monster mother, the Georgia mountain resort town of Black Pine becomes a three-ring circus. Maizie’s fame, the relationship of her PI boss to the client, and the interference of Maizie’s manager/mother who wants her back on their reality show (ALL IS ALBRIGHT) all coalesce into a perfect storm of tabloid news.

There are too many authors to mention, but for the Maizie Albright series, I’d credit Elmore Leonard, Carl Hiaasan, Meg Cabot, and Jennifer Crusie. Their mysteries are simply fun to read and quite funny. I think fun and funny are necessities in life and my hope as an author is to provide that as well.

“I was already a huge fan of Larissa Reinhart’s Cherry Tucker”series, but in her new mystery series, 15 MINUTES, she had me at the end of the first line: ‘Donuts.’
Maizie Albright is the kind of fresh, fun, and feisty “star detective” I love spending time with, a kind of Nancy Drew meets Lucy Ricardo. Move over, Janet Evanovich. Reinhart is my new “star mystery writer!”
— Penny Warner, Author of DEATH OF A CHOCOLATE CHEATER and THE CODE BUSTERS CLUB 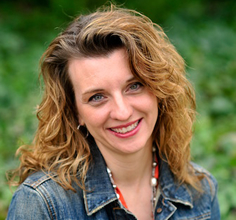 A 2015 Georgia Author of the Year Best Mystery finalist, Larissa writes the Cherry Tucker Mystery and Maizie Albright Star Detective series. The first in the Cherry Tucker series, Portrait of a Dead Guy, is a 2012 Daphne du Maurier finalist, 2012 The Emily finalist, and 2011 Dixie Kane Memorial winner. She loves books, food, and travel in any and all combinations.

Her family and Cairn Terrier, Biscuit, live in Nagoya, Japan, but they still call Georgia home. You can see them on HGTV’s House Hunters International “Living for the Weekend in Nagoya” episode. Visit her website, find her chatting on Facebook, Instagram, and Goodreads, and sign up for her newsletter.