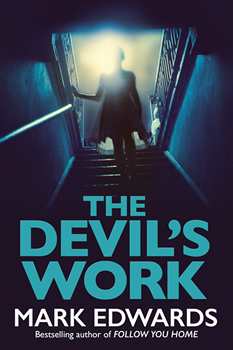 It was the job she had dreamed of since childhood. But on her very first day, when an unnerving encounter drags up memories Sophie Greenwood would rather forget, she wonders if she has made a mistake. A fatal mistake.

When her husband and daughter are pulled into the nightmare, Sophie is forced to confront the darkest secrets she has carried for years.

As her life begins to fall apart at work and at home, Sophie must race to uncover the truth about her new job…before it kills her.

This month, author Mark Edwards discusses his novel, THE DEVIL’S WORK, with The Big Thrill:

I hope readers will come away from THE DEVIL’S WORK feeling thankful that they don’t work in an office like the one in the book—but perhaps feeling a little uneasy about their co-workers. Is there real malice behind the gossip you heard at the water cooler? Are you being spied on by your boss? What does that guy who works in the mailroom actually do in there all day? I’m not saying I want my readers to become paranoid and dread going to work…oh, who am I kidding? That’s exactly what I want!

Domestic noir has been huge the last couple of years, since the release of Gone Girl. The success of that book, and all the other books with “girl” in the title, has shown that thriller readers want books set in familiar places. We’ve had marriages, families, and neighbours from hell, and in THE DEVIL’S WORK we enter the office from hell. There are very few psychological thrillers set in the workplace but it’s a great setting for a scary book. Most of us spend more time at work than we do with our families. We’ve all had a toxic co-worker or a boss who makes our life a misery. I want this book to be the first example office noir.

I surprised myself with the final twist in the book, when the person behind the torment of the main character, is revealed. All the way through I thought one character was going to walk through the door and be revealed as the villain. But when I wrote the scene, a different character stepped through. Suddenly, it all made sense. I went back to ensure it all worked, but I was delighted—if I can surprise myself, I’m confident I can surprise the reader.

The book is dedicated to a man called Sylvester Stein who died as I was finishing it. He was born in 1920 and was 84 when I started working with him. His short-term memory was shot (we had the same meeting every day for a year; no exaggeration) but he was a genius—a playwright, political activist, health campaigner and marketing man—and he taught me a huge amount. Franklin Bird, the octogenarian owner of the company in THE DEVIL’S WORK, is Sylvester’s evil twin. The only things they have in common are their age, their dedication to work, and the amount of ice they like in their gin and tonic. It has to crunch!

I’m a big fan of Ira Levin. When I pictured the office in THE DEVIL’S WORK, I wanted it to look like the Bramford Building from Rosemary’s Baby (which was filmed at the Dakota in New York). I love the clarity of Levin’s storytelling, the precision and lack of wasted words. Stephen King described Levin as the “Swiss watchmaker of suspense novels.” King, of course, was another big influence on me because of the way he puts ordinary people in terrifying situations. The college chapters in THE DEVIL’S WORK were my attempt to emulate Donna Tartt’s The Secret History. Like Richard in TSH, my main character, Sophie, is from a small town and is bewitched by a pair of charismatic characters who lead her into darkness.

“THE DEVIL’S WORK is an assured and effective psychological thriller, from a writer who knows how to tell a compelling and thrilling story.” — My Weekly

“THE DEVIL’S WORK is clever, contemporary, and chillingly plausible. Mark Edwards just gets better and better.” — Clare Mackintosh, author of I Let You Go

“A thrill-ride of a book, relishing the unexpected and unsettling the reader at every turn. It’s deliciously terrifying.” —Elizabeth Haynes, author of Into the Darkest Corner

“Mark Edwards has done it again—another heart-stopping, utterly gripping psychological thriller that had me frantically turning the pages. My favourite book this year.” —CL Taylor, author of The Missing 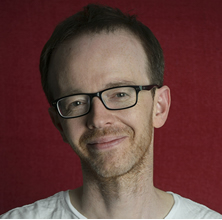 Mark Edwards writes psychological thrillers in which scary things happen to ordinary people and is inspired by writers such as Stephen King, Ira Levin, Ruth Rendell, and Linwood Barclay.

He is the author of three #1 bestsellers: Follow You Home (a finalist in the Goodreads Choice Awards 2015), The Magpies, and Because She Loves Me, along with What You Wish For and six novels co-written with Louise Voss. All of his books are inspired by real-life experiences. His latest book, THE DEVIL’S WORK, is available now.

Originally from the south coast of England, Mark now lives in the West Midlands with his wife, their three children, and a ginger cat.