A Story Too Good to Pass Up 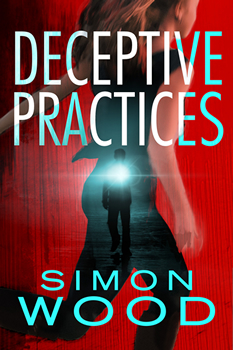 Simon Wood is a born problem-solver. As a petrochemical engineer, he was tasked with preventing oil-rig leaks and keeping drinking water clean; as a racecar driver and a pilot licensed in two countries, he’s generally expected to use his skills and instincts to avoid scenarios involving words like “fiery” and “crash.” (If you’re hoping his resume will get less interesting as we go along, I’m sorry to tell you that Wood, along with his wife, has also done undercover work as a private investigator in California and Nevada.)

So when he turned his attention to writing in 1998–a professional shift that Wood attributes, at least in part, to the lengthy bureaucratic process of immigrating to America from his native UK–it seems only natural that it was the thriller genre, with its puzzle-box plot contortions, that called to him. His first novel, Accidents Waiting to Happen, was published in 2002; since then, Wood has gone on to pen more than a dozen thrillers, including two horror titles written under his pseudonym, Simon Janus. His knack for embroiling his characters in serpentine cons, violent cat-and-mouse games, and Hitchcockian conspiracies has certainly paid off: Since 2011, the Anthony Award-winning author has racked up a sales tally somewhere north of one million books.

Wood’s latest thriller is DECEPTIVE PRACTICES, a stand-alone published by Thomas & Mercer. The book centers on Olivia Shaw, a woman who turns to an underground organization called Infidelity Limited for a bit of rough justice after she discovers that her husband has been cheating on her. When things take an unexpectedly bloody turn and her husband ends up dead, Olivia sets out to exonerate herself of his murder–and exact revenge on his killers.

Faced with the choice of challenging Wood to a high-speed road race or interviewing him about his latest novel, The Big Thrill chose the latter.

Can you pinpoint a moment or incident that sparked the idea for DECEPTIVE PRACTICES?

Usually my stories are inspired by news stories or real-life occurrence, but this book was the result of my dyslexia clashing with the TV Guide. I thought I’d read that an upcoming movie was going to be about a woman who hires a shadowy company to go after her husband after she catches him cheating on their marriage. The movie had absolutely nothing to do with this and I’m not sure what my brain was doing that day to think that was what the movie was about. It wasn’t until I was frothing about my stupid dyslexia sending me on a bum steer that I thought, regardless of my misinterpretation, that the idea of a shadowy company beating up cheating spouses would make for an interesting book. And DECEPTIVE PRACTICES was born.

One thing that’s really intriguing about the book is that your heroine is complicit in the crime that launches the story. Why’d you choose that approach, and did it present unique challenges?

Hitchcock is my spirit animal and his love of knocking someone off life’s tightrope really speaks to me. No one is an angel 24/7. We all have our moments of weakness where we stray from the straight-and-narrow, and I love exploring that because no matter how we think it won’t bite us, it will. So I have no problems with putting a hero or heroine in a compromising position.

The tricky side of this for me as the writer is creating sympathy for the protagonist. I think readers will empathize with Olivia’s plight in the book. She was lashing out and it comes back to bite her.  Her penance is having to make up for her error during the course of the book. I think that’s something very human and something the reader can get behind.

You were an engineer before you became a full-time writer. How do you think your engineer brain affects your storytelling style? 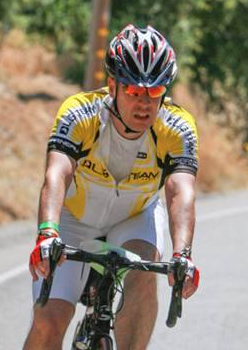 My engineering side makes me a plotter and a planner when it comes to writing. One of my college teachers said I was very empirically minded, and I am. I plan the crimes, walk the streets, learn the skills to make sure the story holds water. Also, my background was in oil rig and refinery design and there is a lot of “what-if” thinking because I’m having to plan for the very worst outcomes and try to prevent them. This has given me a devious mind, which comes in handy when writing thrillers.

Can you give us a little insight into your plotting process?

I will probably spend two or three weeks mulling over the story from beginning to end. I will construct a spreadsheet detailing every scene in the book, which will be color-coded by POV character and main plot/subplot. It helps me think through the story to ensure it holds water and helps prevent me from writing myself into a corner. I know this all sounds a little crazy, but that’s the engineer in me.

You’ve also worked as a private investigator. That obviously gives you some valuable insight into the professional lives of certain thriller characters, but I’m even more curious about what it taught you about character in a broader sense.

My wife and I worked as a team investigating real or perceived staff improprieties at casinos in Vegas and California. I’m naturally a people-watcher and that put me in good stead during our time as private investigators. We might have to spend hours watching someone go about their job and waiting for them to incriminate themselves in front of us. It also taught me to think fast on my feet because we’d be undercover in the casino with no backup or approval from casino security. The casino would want us to investigate to a certain procedure but sometimes the situation didn’t match the plan, which meant we would have to create lies, back stories and fallback plans on the fly. It could be very draining at times, as we’d have to be mentally recording every detail of what was happening as it was happening because we’d have to document it all down to the finest detail for the written report.

I love finding out how writers deal with common writer problems. Let’s say you’re knee-deep in a thriller, and you get stuck. Maybe you’ve written yourself into a corner plot-wise, or a character isn’t working out the way you’d hoped. How do you get unstuck?

If I get stuck, there are usually a couple of things I will do. I will probably watch a bunch of movies and read a bunch of books that are in the same style that I am going for in the attempt to inspire new ideas. The other thing that I will do is ride my bike. I can ride for miles and miles with no one around me and let my mind wander. It wouldn’t be the first time that something has popped into my head from seemingly nowhere.

My next book is a follow-up to [2012’s] Paying the Piper. The characters from that book are drawn into a new high-profile kidnapping case. It’s due out in 2017. 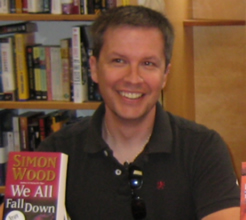 Simon Wood is a California transplant from England. He’s a former competitive racecar driver, a licensed pilot, an endurance cyclist, an animal rescuer and an occasional PI. He shares his world with his American wife, Julie. Their lives are dominated by a longhaired dachshund and four cats. He’s the Anthony Award winning author of Working Stiffs, Accidents Waiting to Happen, Paying the Piper, Terminated, Asking For Trouble, We All Fall Down and the Aidy Westlake series. His current thriller THE ONE THAT GOT AWAY has been optioned for a movie adaptation. His next book DECEPTIVE PRACTICES will be out in November 2016.